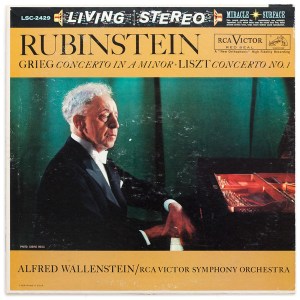 The strings are RICH in the best Living Stereo tradition, but unlike so many classical pressings we play, the tubey magical string tone comes with virtually no tube smear. The textures and overtones are fully intact.

This side may in fact be pretty much as good as it gets; we don’t have enough copies to know just how good the recording can be, but it can’t be too much better than this, because this side puts most Golden Age classical recordings to shame.

Side two, which contains the third movement of the Grieg and the complete Liszt Piano Concerto no. 1, is not quite as rich as we would have liked. It’s cut lower than side one, so turn up the volume if you want it to come to life.

It’s also not nearly as transparent. We grade it about A Plus — a step up over the average Shaded Dog but not the equal of this wonderful side one.

The work is among Grieg’s earliest important works, written by the 24-year-old composer in 1868 in Søllerød, Denmark, during one of his visits there to benefit from the climate, which was warmer than that of his native Norway.

Grieg’s concerto is often compared to the Piano Concerto of Robert Schumann — it is in the same key, the opening descending flourish on the piano is similar, and the overall style is considered to be closer to Schumann than any other single composer. Grieg had heard Schumann’s concerto played by Clara Schumann in Leipzig in 1858, and was greatly influenced by Schumann’s style generally, having been taught the piano by Schumann’s friend, Ernst Ferdinand Wenzel. Compact disc recordings often pair the two concertos.

Additionally, Grieg’s work provides evidence of his interest in Norwegian folk music; the opening flourish is based around the motif of a falling minor second (see interval) followed by a falling major third, which is typical of the folk music of Grieg’s native country. This specific motif occurs in other works by Grieg, including the String Quartet. In the last movement of the concerto, similarities to the halling (a Norwegian folk dance) and imitations of the Hardanger fiddle (the Norwegian folk fiddle) have been detected.

The concerto was originally scored for 2 flutes, 2 oboes, 2 clarinets in A and B flat, 2 bassoons, 2 horns in E and E flat, 2 trumpets in C and B flat, 2 trombones, tuba, timpani and strings (violins, violas, cellos and double basses). He later added 2 horns and changed the tuba to a third trombone.