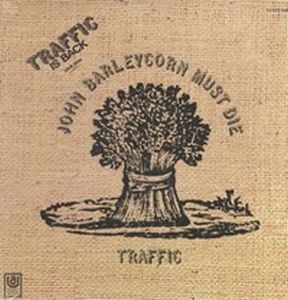 This killer United Artists LP has the sound we love on Barleycorn (and pretty much any Classic Rock album from the era). It’s rich, smooth, sweet; in short, it has the sound you find only on the best vintage vinyl.

Note that we do not say “original” — some of our highest scoring copies were on the second, plain brown label. We believe the term vintage is more accurate. “Old” works well too for that matter. Stick with the stuff from the ’70s and you’ll save yourself a lot of grief (not to mention dough) chasing after the kind of analog sound that is found practically nowhere else.

And what about the Pink Label original Island pressings? They can be very good, even shootout winning. We have a noisy reference copy we keep around for our shootouts just to make sure our winners have all the Tubey Magic that they should.

What the best sides of John Barleycorn Must Die have to offer is not hard to hear:

The flute (a major element of the music if you know the album) is much airier here than it would be on most copies. Chris Wood’s sax, which is a key part of many of the best tracks, and beautifully recorded I might add, is potentially amazing sounding as well, with good body and lovely harmonic texture.

Note how little processing there is to the sound of the horns and woodwinds, how real they sound. This is unusual, to say the least in the world of pop records.

What to Listen For on John Barleycorn Must Die

We learned something new a while back, and we learned it by simply running into an amazingly transparent copy that made it clear — for the first time — exactly what Winwood was doing on the piano with his left hand. There are two musical figures that alternate: one, involving the lower notes, which tend to be blurry, obscured and murky on most pressings, followed by two, the right-handed higher notes, which are usually much more clear and audible in the mix.

Only the very best copies let us “see” the bass notes of the piano so clearly and correctly. Next time you want to compare different pressings of Barleycorn, pay special attention to the lower notes of the piano on Glad. It is our contention, backed by mountains of evidence, that no two copies of the album will get that piano to sound the same. (It will also help if you have large dynamic speakers with which to do the test.)

Getting the voices right on Stranger to Himself is practically impossible; if the voices are full, smooth, yet breathy and clear, you have that rare copy that actually gets the midrange right. Not many do.

The last portion of this track has some really interesting percussion and organ effects. Traffic were trying to break out of the standard pop song format by letting this song wander into psychedelic territory for a few minutes at the end. It’s now become my favorite part of the song.
The reason you want to pay close attention to this part is because it helps you to judge the transparency, immediacy, and top end extension for the whole side. It should be amazingly clear and open-sounding. On too many pressings, the percussion instruments are blurred and lost in the mix. On a Hot Stamper copy they’ll be right in front of you, allowing you to appreciate the interplay among the musicians as they contributed their various parts.

You’ll need lots of top end extension for this song to sound right. On many copies the double tracked flute solo in the middle of the song will be aggressive and irritating, but on a Hot Stamper pressing, the flutes will sound airy and breathy with a reasonably good sustain.

The quality of the voice is what really sets the best copies apart. Winwood is much more present on the better copies. He’s recessed on most and that’s just not where he needs to be for the song to work musically. He needs to be right up front, surrounded by the air and ambience of the studio. The transparency found on the better copies will give you precisely that.

The acoustic guitars that open up this song are absolute perfection on the best copies — Tubey Magical analog at its best.
This is the real test for side two. The acoustic guitars should sound rich and sweet. You’ll notice at the beginning of the song that they are a little dull. The last thing in the world you want to do, however, is to brighten them up, because when you do that, as some mastering engineers have in the past, the harmony vocals and the percussion and the tambourine become much too bright later on in the song. You have to strike a balance between all the elements. That means Steve’s voice at the beginning needs to be a little reserved so that the harmony vocals later on will come in right.

This song is almost always noisy. The domestic pressings suffer from bad vinyl and virtually every British copy we’ve seen lately has been beat to death.

It’s virtually impossible to find quiet copies of this record, let alone ones that sound anything like our best. There’s always going to be some (hopefully slight) inner groove distortion and there’s always going to be some surface noise. United Artist vinyl is not known for being particularly quiet, so had you cracked open a brand new copy of the album in 1970 you would probably have heard plenty of noise back then too.

This is of course how MoFi got their start. The major labels were producing such a high percentage of defective pressings that the door was open for someone to come along with a flat, quiet pressing, especially if it sounded “good” to boot They could even charge twice the price — $20 back when a major label pressing was well under $10.

We have since come to learn, at great expense to be sure, that most MoFi’s don’t sound good. That’s a story you’ve no doubt already heard since we’ve been telling it for more than twenty years.

Steve Winwood graduated from teenage soul-singing prodigy with The Spencer Davis Group to chart-riding psychedelic single star with Traffic, whose “Hole In My Shoe” was one of the anthems of 1967. After the demise of supergroup Blind Faith, he returned to his former Traffic bandmates Jim Capaldi and Chris Wood. A proposed solo album, to be called Mad Shadows, became a comeback vehicle for Traffic, who would continue their merry way through to the mid-1970s.

The reduction of pressure after Blind Faith helped Winwood overcome a writing block. Capaldi, his lyricist of choice, also contributed drums, while Wood brought to the mix his facility on sax and flute, the latter adding a pastoral touch to the title track, an adaptation of a traditional folk song about the evils of alcohol. A scorn for all things commercial was conveyed by the opening 13-minute medley of “Glad,” a piano-led instrumental, and “Freedom Rider.”

A certain amount of overdubbing was needed to produce the album. Winwood carried the triple load of lead vocals, guitar, and piano, but the inevitably spacey arrangements allowed Winwood and pals to “go places within the music that we had never gone before.” It all took place in the cottage at Aston Tirrold where the centerfold picture was taken — the venue where Traffic started a trend among rock groups for “getting it together in the country.”

After a turbulent year in the spotlight as part of the supergroup Blind Faith, Steve Winwood began 1970 disillusioned with the music business and facing an all-too-common reality: He and Traffic, the band that broke up when Blind Faith come knocking, owed United Artists two more records. The keybordist and singer, then twenty-two, went into the studio right away, composing songs for what he expected would be his first solo album (working title: Mad Shadows). A few songs in, wanting more musical energy than he could generate himself, Winwood asked two of his old cronies from Traffic, drummer and sometime singer-lyricist Jim Capaldi and woodwind player Chris Wood, to stop by. Before long, Traffic was reborn.

John Barleycorn Must Die collects the music the three made during a feverish round of sessions; there are long expanses of jamming punctuated by brief sections featuring Winwood’s searing vocals, a template Traffic would use on later works. Barleycorn retains the crusading spirit of the band’s first two albums while moving into even more improbable realms — among them old English balladry (the title cut), jazz-rock fusion (the instrumental “Glad,” a most original appropriation of New Orleans-style piano), existential rock (“Empty Pages”), and an introspective shade of soul (“Stranger to Himself”).

The band’s range is impressive, as is its unconventional instrumentation — at times Winwood supplies bass on the organ, and is accompanied by just drums and saxophone. Still, the salient characteristic of John Barleycorn, and what separates it from everything else of the day, is its earthy, unpressured feel. The tunes, most written by Winwood and Capaldi, sound like they sprouted during superfriendly jam sessions. Though they’re built on strong fundamentals — old-fashioned verse-chorus discipline — they’re ruled by a marvelous wildness, a sense that the ad-libbed explorations are as important as the hooks. Later, Traffic and others got snarled in brain-cramping attempts at prog-rock wonkery. Here, though, the band sounds utterly grounded. As the grooves percolate effortlessly along, it becomes clear that unity, not any technical skill, is what makes the music levitate.