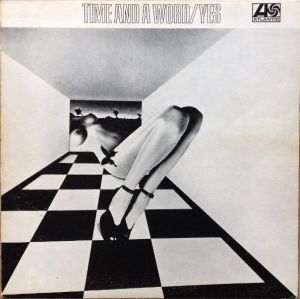 Yes in the Seventies

The amount of effort that went into the recording of this album is comparable to that expended by the engineers and producers of bands like Supertramp, The Who, Jethro Tull, Ambrosia, Pink Floyd and far too many others to list. It seems that no effort or cost was spared in making the home listening experience as compelling as the recording technology of the day permitted.

Yes is clearly one of the handful of bands to produce an immensely enjoyable and meaningful body of work throughout the ’70s, music that holds up to this day. The music on their albums, so multi-faceted and multi-layered, will surely reward the listener who makes the effort to dive deep into their complex soundscapes.

Repeated plays are the order of the day. The more critically you listen, the more you are apt to discover within the exceedingly dense mixes favored by the band. And the better your stereo gets, the more you can appreciate the care and effort that went into the production of their recordings.

Yes albums always make for tough shootouts. Like Pink Floyd, a comparably radio-friendly Pop Prog band, their everything-but-the-kitchen-sink approach to recording makes it difficult to translate their complex sounds to disc, vinyl or otherwise. Everything has to be tuned up and on the money before we can even hope to get the record sounding right. (Careful VTA adjustment could not be more critical in this respect.)

If we’re not hearing the sound we want, we keep messing with the adjustments until we do. There is no getting around sweating the details when sitting down to test a complex recording such as this. If you can’t stand the tweaking tedium, get out of the kitchen (or listening room, as the case may be). Obsessing over every aspect of record reproduction is what we do for a living. Pink Floyd’s recordings require us to be at the top of our game, both in terms of reproducing their albums as well as evaluating the merits of individual pressings.

When you love it, it’s not work, it’s fun. Tedious, occasionally exasperating fun, but fun nonetheless.

No Opportunity Necessary, No Experience Needed
Then
Everydays
Sweet Dreams

The Prophet
Clear Days
Astral Traveller
Time And A Word

I suppose it’s understandable why Yes‘ debut has never received too much praise or recognition; I personally liked the self-titled a lot, but the band were clearly a few steps away from finding the sound they’re known for. It’s not so understandable why Time and a Word also seems to have flown under the radar. Sure, Yes were an album away from inducting Steve Howe as their guitarist (and two from Rick Wakeman as keyboardist) but it was here where Yes‘ signature style took form. Time and a Word isn’t Yes at their best, but it’s an incredibly underrated slice of prog rock history.

Time and a Word is, in many ways, typical for a band’s second album. It takes the successes of the first album and matures them, adding fresh elements when possible. In the context of Yes‘ career as a whole, Time and a Word is a transition piece, elevating the band from the psychedelic organ rock of the self-titled into something more ambitious and nuanced- Time and a Word would start a streak of ambitious symphonic prog that would last a decade. I’ve heard that Yes felt the urge to polish their technical skills once they heard King Crimson perform; even when compared to the relatively capable debut, it’s clear that they took that challenge to heart with Time and a Word. Listening to “Then” or “The Prophet”, one gets the impression of a band making an effort to push themselves wherever possible. Yes weren’t as refined circa 1970 as they would be with their canonical masterpieces, but to hear a band with such an apparent motivation to aspire and improve is a treat of its own.

Whereas most symphonic prog makes use of synthesizers to get the ‘symphonic’ element across, Time and a Word hosts a full string section. The good intention is admittedly better than the execution itself, but it’s nonetheless impressive to hear such a young band trying to work a true-to-life symphonic layer into their music. There are places where the string section gets overzealous (a great song is hiding somewhere in “Clear Days” for example, but the prominent string section sounds aimless) but it does give Time and a Word a unique sound- Yes wouldn’t try this again until their nineteenth album, Magnification, in 2001. For proof of the string section’s potential in Yes‘ music, just listen to the way it accentuates the instrumentation on “The Prophet” or the title track. The approach was in its rough stages, but I think Yes could have done some cool things with an orchestra, had they stayed the course.

While I’ve never been as impressed by Bill Bruford’s work with Yes as others clearly have (I’ve always felt his talents were more apparent with King Crimson), the drums are among the most impressive elements here. Bruford’s playing is dynamic and calculated, a style that works particularly well with this record. Of course, that all-too large proportion of listeners who cannot dissociate Yes from Howe and Wakeman will be wondering how their predecessors – Peter Banks and Tony Kaye respectively – fare on Time and a Word. Peter Banks’ guitar work won me over with the self-titled debut, and only continues to do so with Time and a Word. While Steve Howe plays with a notable classical influence, Banks brings a jazzier tinge to Yes. While Time and a Word brought Yes much closer to their symphonic trademark than the debut, Banks’ predilection for jazz is still evident in the playing – it makes me wonder what Yes might have sounded like, had Banks stuck with Yes. Tony Kaye’s work on the keyboard isn’t quite as impressive – he holds his own on Time and a Word, but he doesn’t compare with the virtuosity Wakeman brought to the keyboard from Fragile onwards.

As the most consistent and only stable member Yes has ever had, Chris Squire’s brilliantly distinctive style with bass really takes form on Time and a Word. On “The Prophet” and “Astral Traveller” in particular, Squire’s importance to the band is incredibly evident. Lastly, Jon Anderson’s higher register vocals seem to be a love-it-or- hate-it thing for a lot of listeners, and his voice sounds similar here as it would for the rest of their progressive output, albeit in less refined form. Time and a Word is certainly more impressive from an instrumental perspective, and it would be at least another album before Anderson hit his vocal peak; with that said, he sounds particularly good on “Clear Days” and Time and a Word.

The songwriting here is generally pretty solid, albeit inconsistent in comparison to their later work. “The Prophet” and “Then” stand as two of Yes‘ strongest pieces- “The Prophet” in particular sounds like an epic condensed into seven minutes! On the other side, “Sweet Dreams” feels pretty one-sided, and “Clear Days” sounds like a half-baked Beatles tune. It’s counter-productive to go comparing this to their ‘classic’ albums too much- Yes were at a different stage in their musical life then we’re used to as listeners in retrospect. Its flaws should be forgiven for its risky ambition and vitality. If Yes‘ debut was a prelude to their glory years as a band, Time and a Word sees them making a bold first step into the realm of prospective greatness. 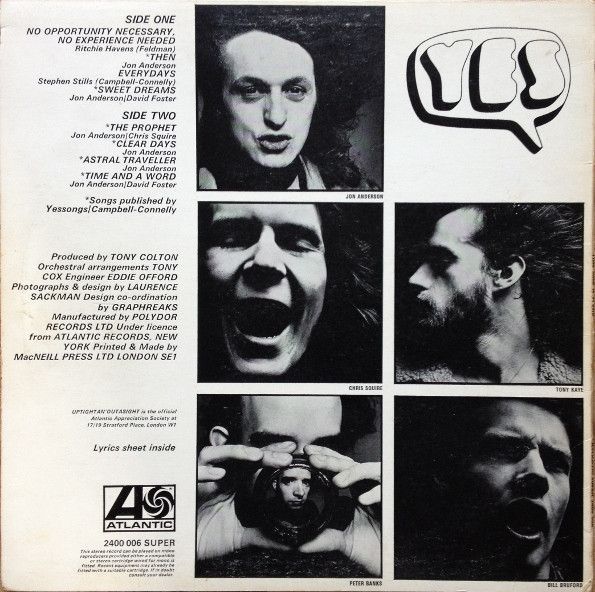