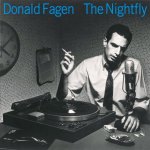 We just finished a big shootout for Donald Fagen’s solo effort from 1982 (just two years after Gaucho and the end of Steely Dan) and we gotta tell you, there are a lot of weak sounding copies out there. We should know; we played them.

Robert Ludwig cut all the originals we played. Are you going to tell me that every copy with RL in the dead wax sounds the same as every other copy with those initials? The question answers itself.

The upper mids on certain tracks of both sides have a tendency to be brighter than we would like.

Ruby Baby on side one can be that way, and the title track on side two has some of the wannabe hit single radio EQ that makes it the “least likely to succeed” so to speak.

On a good copy the first track of each side should be all you need to hear.

New Frontier
The Nightfly
The Goodbye Look
Walk Between Raindrops

A portrait of the artist as a young man, The Nightfly is a wonderfully evocative reminiscence of Kennedy-era American life; in the liner notes, Donald Fagen describes the songs as representative of the kinds of fantasies he entertained as an adolescent during the late ’50s/early ’60s, and he conveys the tenor of the times with some of his most personal and least obtuse material to date.