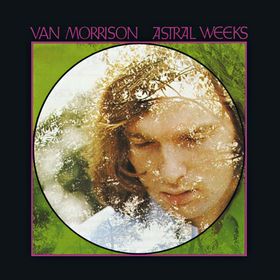 I don’t think there’s too much I can tell you about Astral Weeks that’s going to convince you to buy it or not. It’s obviously one of the man’s (many) masterpieces, his most unique and original contribution to the music of his time, and one of the most beloved albums in his canon.

This original Green Label pressing has the kind of Tubey Magical Midrange that modern records can barely BEGIN to reproduce. Folks, that sound is gone and it sure isn’t showing signs of coming back. If you love hearing INTO a recording, actually being able to “see” the performers, and feeling as if you are sitting in the studio with the band, this is the record for you. It’s what vintage all analog recordings are known for — this sound.

When you get good pressings of these artist’s albums they just can’t be beat. The sound is so right in so many ways that you find yourself ignoring the sound and just getting lost in the music.

This is one of those albums. Drop the needle on any track for a taste of real ’60s Tubey Magical Warner Brothers analog and Van’s unique mostly-acoustic blend of Celtic folk, soul, blues, and jazz.

Although the early reissues from 1973 on the Burbank label can sound quite good, one has yet to win a shootout. However, the second label has beaten some Green Label original pressings that, for whatever reason, weren’t mastered or pressed properly and therefore didn’t sound as good to us when played against the best pressings we had on hand for our shootout.

Astral Weeks is generally considered one of the best albums in pop music history, but for all that renown, it is anything but an archetypal rock & roll album. It isn’t a rock & roll album at all.

Producer Lewis Merenstein added chamber orchestrations later and divided the album into halves: “In The Beginning” and “Afterwards” with four tunes under each heading. Morrison’s songs are an instinctive, organic mixture of Celtic folk, blues, and jazz. He fully enters the mystic here, more in the moment than he ever would be again in a recording studio. If his pop hit “Brown-Eyed Girl” was the first place he explored the “previous” — i.e., the depths of his memory — for inspiration and direction, he immerses himself in it here.

The freewheeling, loose feel adds to the intimacy and immediacy in the songs. They are, for the most part, extended, incantatory, loosely narrative, and poetic ruminations on his Belfast upbringing: its characters, shops, streets, alleys, and sidewalks, all framed by the innocence and passage of that era. Morrison seems hypnotized by his subjects; they comfort and haunt a present filled with inexhaustible longing and loneliness.

He confesses as much in the title track: “If I ventured in the slipstream/Between the viaducts of your dream/Where immobile steel rims crack/And the ditch in the back roads stop/ Could you find me?/Would you kiss-a my eyes/…To be born again….” Morrison doesn’t reach out to the listener, but goes deep inside himself to excavate and explore.

The album’s centerpiece is “Madame George,” a stream-of-consciousness narrative of personal psychological and spiritual archetypes deeply influenced by the road novels of Jack Kerouac. The climactic epiphany experienced on “Cyprus Avenue” paints a portrait of place and time so vividly, it fools listeners into the experience of shared — but mythical — memory. “The Way Young Lovers Do” is the most fully formed tune here. Its swinging jazz verses and tight rhythmic choruses underscore a simmering, passionate eroticism in Morrison’s lyric and delivery.

Astral Weeks is a justified entry in pop music’s pantheon. It is unlike any record before or since; it mixes together the very best of postwar popular music in an emotional outpouring cast in delicate, subtle musical structures.