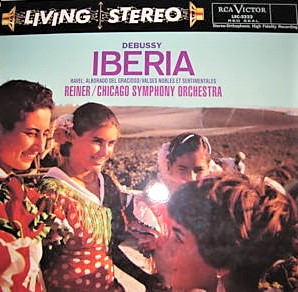 This is a wonderful sounding Shaded Dog pressing. Side two is especially dynamic.

This has long been considered one of the Living Stereo triumphs. The spaciousness and tonal correctness are legendary.

This copy does not have the prodigious bass of some that I’ve heard. The Classic reissue has plenty of deep bass, but it’s shrill and hard and altogether unpleasant, so the better bass comes at a steep price.

This copy plays M- most of the time — it’s actually very quiet. The tape hiss is frequently louder than the surface noise. But with so many quiet passages, there’s little to obscure the quality of the vinyl of the day.

Ibéria is the second of three pieces Debussy composed between 1905 and 1912 that are included in the set titled Images pour Orchestre, the first being Gigues, and the last Rondes de printemps. Ibéria itself is in three movements. He originally planned the pieces for two pianos, but came to the realization that his visions required the full palette of colors of a symphony orchestra.

For Debussy, the musical essence of Spain was subtle insinuation, elegant rhythmic dash, and, perhaps surprisingly in a pictorial work such as Ibéria, a considerable amount of polyphonic activity. The Spain he conjured in Ibéria is drawn purely from the imagination, for the French composer had spent no more than a few hours in the country he chose to depict musically.

But that Debussy’s Spanish divinations had authentic flavor and spirit was attested to by no less an authority than the great Spanish composer Manuel de Falla, who said of Ibéria, in part: “The echoes from the villages, a kind of sevillana – the generic theme of the work – which seems to float in a clear atmosphere of scintillating light; the intoxicating spell of Andalusian nights, the festive gaiety of a people dancing to the joyous strains of a banda of guitars and bandurrias… all this whirls in the air, approaches and recedes, and our imagination is continually kept awake and dazzled by the power of an intensely expressive and richly varied music.” Falla also thought that Debussy used an ideal approach in composing Ibéria, utilizing merely the fundamental elements of popular music instead of employing authentic folk songs.

The first section, “In the Streets and Byways,” opens with dancing triplet figures in the winds (the woodwinds are the true heroes of Ibéria), castanets, and tambourine, in alternation with strings plucked in modally inflected consecutive fifths. Into this insinuating rhythmic activity the main theme, part plaintive, part haughty, enters on clarinets (two). Throughout the movement this theme, fragmented or in its entirety, on its own or used in a contrapuntal texture, plays the leading role, even though other themes glint in and out of the streets and byways, including a languorous Moorish tune in oboe and viola that will enter again in the second movement, and a martial proclamation by horns and trumpets that is taken up at some length. After a return of the main theme, the music just dissolves into thin air.

The second movement, “Perfumes of the Night,” is pure Impressionistic poetry, opening with an enchanted garden of provocative sonorities: high muted strings, touches of winds, xylophone, celesta, and tambourine form the backdrop for a hesitant oboe which finally finds the courage to sing the seductive melody it foreshadowed in the first movement. An ardent, syncopated idea in the strings becomes an important factor in an increasingly intense climax, after which winds, strings, and muted trumpets recall the first movement’s main theme.

After yet another climax, a flute and a violin voice the melancholy motif introduced earlier by horn, and as bells sound in the distance, the third movement,  “Morning of a Festival Day,” begins without pause. When the day has fully awakened, the strings, strumming vibrant chords like some giant guitar, take the festivities on a joyous course. Themes from the first and second movements are recalled, and the finale, erupting in dazzling exuberance, is an essay in Iberian abandon illuminated by Gallic control.