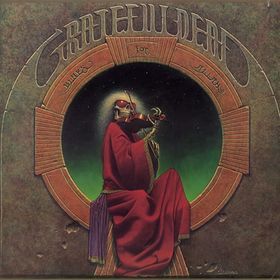 This fun and funky mid-’70s Grateful Dead LP has two excellent sides. This album features the extended workout of “Help On The Way” into “Slipknot” into “Franklin’s Tower” — a fan favorite which remained a staple of Dead shows into the ’90s. On an energetic and tubey magical copy like this one, it’s a trip!

Shakedown Street and Terrapin Station have their moments but are certainly not as consistent as this album.

This original pressing has the kind of Tubey Magical Midrange that modern records cannot even BEGIN to reproduce. Folks, that sound is gone and it sure isn’t showing signs of coming back. If you love hearing INTO a recording, actually being able to “see” the performers, and feeling as if you are sitting in the control room hearing the master tape being played back, or, better yet, the direct feed from the studio, this is the record for you. It’s what Vintage Analog Recordings are known for — this sound.

If you exclusively play modern repressings of vintage recordings, I can say without fear of contradiction that you have never heard this kind of sound on vinyl. Old records have it — not often, and certainly not always — but less than one per cent of new records do, if our experience with the hundreds we’ve played can serve as a guide.

The Grateful Dead went into a state of latent activity in the fall of 1974 that lasted until the spring of the following year when the band reconvened at guitarist/vocalist Bob Weir’s Ace Studios to record Blues for Allah… Obviously, the time off had done the band worlds of good, as Blues for Allah — more than any past or future studio album — captures the Dead at their most natural and inspired.