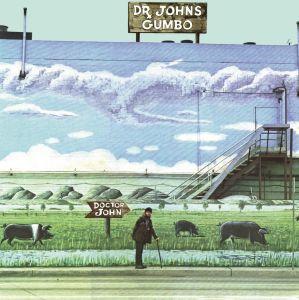 You may have read this commentary in our other Dr. John listing, the one for In The Right Place. The two recordings — and therefore the Hot Stamper pressings made from them — share much in common, so we’ve more or less copies the listing for that album into this one. What’s good about one is good about the other, and vice-versa.

This original Yellow Label Atco pressing has the kind of Tubey Magical Midrange that modern records cannot even BEGIN to reproduce. Folks, that sound is gone and it sure isn’t showing signs of coming back. If you love hearing INTO a recording, actually being able to “see” the performers, and feeling as if you are sitting in the studio with the band, this is the record for you. It’s what vintage all analog recordings are known for — this sound.

The sound is BIG and BOLD with a punchy bottom end, but like almost every copy out there it has a bit of grit and grain at times — Same Old Same Old on side one is never going to be smooth and sweet, for example.

What the best sides of this killer Bayou Funk album have to offer is not hard to hear:

What We’re Listening For on Dr. John’s Gumbo

Dr. John’s Gumbo bridged the gap between post-hippie rock and early rock & roll, blues, and R&B, offering a selection of classic New Orleans R&B, including “Tipitina” and “Junko Partner,” updated with a gritty, funky beat. There aren’t as many psychedelic flourishes as there were on his first two albums, but the ones that are present enhance his sweeping vision of American roots music. And that sly fusion of styles makes Dr. John’s Gumbo one of Dr. John’s finest albums.