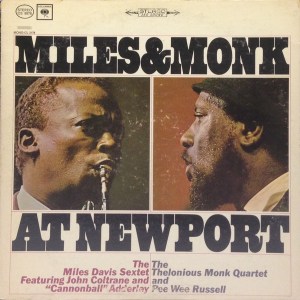 This Columbia 360 LP has EXCEPTIONALLY GOOD LIVE JAZZ SOUND, but only on the Monk side. It sounds, to my mind, probably as good as this record can sound. It’s very rich and full-bodied with a very strong bottom end. The energy and presence are WONDERFUL! Monk’s piano has real weight and the brass sounds just right. We played this against a few other copies and none of them came close. We give side two an A++ — I don’t think you can find one that sounds any better.

Of special note is the excellent work of Frankie Dunlap on drums, and of course Charlie Rouse is always interesting. Add to those top players someone you wouldn’t normally associate with Monk — Pee Wee Russell on clarinet, here proving that he’s every bit the bop jazz musician that these other guys are.

The Miles side sounds like what you’d expect from an old jazz concert recording — somewhat thin, flat, and lifeless. We didn’t give it a grade, and we’ve never heard one that sounded very good. I just don’t think Hot Stampers for the Miles side are in the cards.

On the first side of the LP was a series of high tempo performances of bebop tunes and other staples of the Davis live repertoire from 1958. The performance was contemporaneous with Davis’ Milestones album. Aside from the 1973 release Jazz at the Plaza (also a 1958 concert) during the LP era, this was the only legitimate (non-bootleg) recording of a live Davis combo performance earlier than the Blackhawk recordings. As such, this performance and Jazz at the Plaza were the only legitimate live recordings representing the Kind of Blue sextet… On the second side were a few numbers by Thelonious Monk’s combo, from a 1963 Newport appearance.. It featured the idiosyncratic appearance by clarinetist Pee Wee Russell.