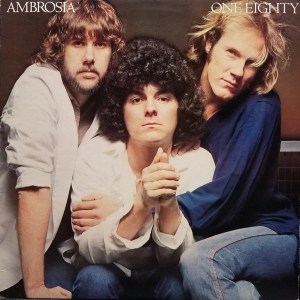 This is smooth, rich ANALOG at its best, easy on the ears as we like to say.

This is clearly the poppier side of Ambrosia, containing as it does two of their highest-charting mainstream hits, Biggest Part of Me (#3) and You’re the Only Woman (#13). I myself of course prefer the proggy first two albums, falling as they do into the broad category of Art Rock where my favorite albums by Bowie, Peter Gabriel, Roxy Music, Supertramp, 10cc, later-period Beatles, Jethro Tull, Pink Floyd, Traffic and so many others from the last forty-plus years can be found.

These artists’ recordings tend to be big, powerful and exceedingly hard to reproduce, which, probably more than anything else, accounts for my becoming a serious stereo enthusiast while still in my teens. (My mother had to co-sign the loan I needed to purchase the currently-state-of-the-art ARC SP3A-1 preamp I coveted. I remember it being $600+ at a time when I was earning roughly $2 an hour. That had to hurt, but I did it. Bought a D-75 amp after I paid it off too.)

One Eighty (recorded on 1/80, get it?) kicks off with a real rocker: Ready, which is a great name for an opening track and really gets the album off to a high-energy start. Side two opens with my favorite track on the album, Livin’ On My Own. I actually used to demonstrate my system with it: the bass is huge, way up in the mix and really punchy. Additionally there are powerful multi-tracked vocal harmonies in the chorus that are wall-to-wall, surprisingly dynamic, yet sweet (all things considered; this is a modern recording after all).

One Eighty has an excellent mix of rock and softer pop ballads. The last track, Biggest Part Of Me, no matter how many times you’ve heard it, on the radio or elsewhere, is an exceptionally well-produced (designed?) piece of songcraft that will tug at anyone’s heartstrings, anyone who has a heart that is (if I may quote the title of the best song Burt Bacharach ever wrote). On a big audiophile system it should be both powerful and emotional.

Of course that won’t be the case if you don’t like popular music. I’m glad to say I’m not the kind of snob who looks down his nose at a good soft rock hit. (I’m a snob in other ways of course; who isn’t?) I don’t mind admitting I enjoy the hell out a good Hall & Oates jam, and I positively love Bread. Ambrosia can and does hold their own with the best of these soft-rockers. And they usually sound better doing it.

A++, this one had many of the best qualities of our shootout winner, with breathy, not-edgy vocals, punchy drums, good energy and most of the top end that’s possible. Nothing to complain about, plenty to love! A solid A++ finisher.

A+ to A++, fat, rich bass, way up in the mix just the way we like it. Some smear and a bit thick, but very musical and above all very analog.

Number One: Edgy vocals. With so much multi-tracking, most copies have them to one degree or another. The best copies get rid of the edge while keeping the all-important breathiness and presence.

Number Two: Energy. The best copies really come to life, most copies do not. Play any two pressings side by side and the energy levels should clearly be different, assuming you have a dynamic system and can play the album at good loud levels.

Ambrosia albums always make for tough shootouts. Like Yes, a comparably radio-friendly Pop Prog band, their everything-but-the-kitchen-sink approach to recording make it difficult to translate their complex sounds to disc. vinyl or otherwise. Everything has to be tuned up and on the money before we can even hope to get the record sounding right. (Careful VTA adjustment could not be more critical in this respect.)

If we’re not hearing the sound we want, we keep messing with the adjustments until we do. There is no getting around sweating the details when sitting down to test a complex recording such as this. If you can’t stand the tweaking tedium, get out of the kitchen (or listening room as the case may be). Obsessing over every aspect of record reproduction is what we do for a living. Ambrosia’s recordings require us to be at the top of our game, both in terms of reproducing their albums as well as evaluating the merits of individual pressings.

Ambrosia easily makes the cut as one of the handful of bands to produce an immensely enjoyable and meaningful body of work throughout the ’70s, music that holds up to this day. Their debut is still my All Time Favorite Album and has been for close to thirty years. The music on this album, so multi-faceted and multi-layered, will surely reward the listener who takes the time to dive deep into its sound. Repeated plays are the order of the day. The more you listen the more you will discover in these exceedingly dense mixes.

And the better your stereo gets the more you can appreciate the care and effort that went into the production of their recordings. The first two albums just cannot be beat — if you have the right pressings (the ones with the Hottest Stampers of course). I would rate this one a step down from the first album and closer to the second, although in a very different way. Even after all these years, the best pressings still have the power to take you on a remarkable audio journey. (Big speakers will be a big help in this regard.)

The ballads are the album’s redeeming feature. They are all lovingly crafted and boast strong, often complex melodies that keep them from getting too sappy or sentimental: “You’re the Only Woman” is a keyboard-rich song that highlights Christopher North’s soulful Hammond organ playing, and “Livin’ on My Own” layers harmonies reminiscent of the Doobie Brothers over a jazzy tune driven by an intricate bassline. The album’s finale, “Biggest Part of Me,” is the best of these ballads. It combines rich Beach Boys-styled harmonies with a heartfelt lyric to create a rich slice of blue-eyed soul that gave the group a number two hit single…