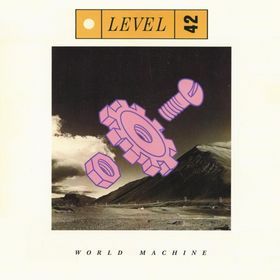 This British Polydor pressing of Level 42’s BEST ALBUM makes a mockery of most of what’s out there — who knew the sound could be this good? Punchy bass, breathy vocals, snappy drums; it’s all here and it reallyl comes JUMPIN’ out of the speakers on this pressing.

What was striking this time around was just how smooth, rich and tubey the sound was on the best copies. It’s been a few years since we last did this shootout and it’s amazing to us how much better this title has gotten in that short span of time.

Of course, the recording very likely got no better at all, but our system, set-up, room, electricity and who-know-what-else sure did.

World Machine has been a personal favorite of mine since I first played it way back in 1985. Of course in 1985 I had only a domestic pressing, and if you want to hear what happens when you use a dub of the British master tape and then brighten the hell out of it in the mastering process, I heartily recommend you find yourself a copy, there’s one sitting in every record store in town. The grain and the grunge on the domestic LPs is hard to believe — yet somehow I actually used to put up with that sound!

I could listen to it then but I sure couldn’t listen to it now. No doubt you have your share of records like that.

What do the best Hot Stampers pressings of World Machine give you? Let’s dig a little deeper.

Energy for starters. What could be more important than the life of the music?

The Big Sound comes next — wall to wall, lots of depth, huge space, three-dimensionality, all that sort of thing.

Then transient information — fast, clear, sharp attacks, not the smear and thickness so common to the standard LP.

Tight punchy bass — which ties in with good transient information, as well as the issue of frequency extension which is discussed later.

Next: transparency — the quality that allows you to hear deep into the soundfield, showing you the space and air around all the instruments.

Resolution plays into this general area, although somewhat surprisingly the two do not always go hand in hand. It seems counter-intuitive but we notice the effect so often that we have to believe that it is in fact quite real.

Then: presence and immediacy. On pop and rock records (our bread and butter) the vocals aren’t “back there” somewhere, lost in the mix. They’re front and center where any recording engineer worth his salt would put them.

Extend the top and bottom and voila, you have The Real Thing — an honest to goodness Hot Stamper.

World Machine pushes their newfound radio-friendly sound into the forefront, and the result is one of the finest pop albums of the mid-’80s. “Something About You” exemplifies Level 42’s sound at the peak of its success. Bassist Mark King’s vocals, while limited in range, are soulful and yearning, while keyboardist Mike Lindup’s complimentary falsetto backing vocals add just the right ingredient to the mix. Given the group’s original guise as an all-instrumental jazz combo, the musicianship is brilliant, and “Something About You” proves how good a song can sound coming from the radio. Unlike most albums that contain one strong single surrounded by duds, World Machine has more than its share of fine tunes.

Level 42 are an English pop rock and jazz-funk band who had a number of worldwide and UK hits during the 1980s and 1990s.

The band gained fame for their high-calibre musicianship—in particular that of Mark King, whose percussive slap-bass guitar technique provided the driving groove of many of the band’s hits. The band are also known for the combination of King’s lead vocals and keyboard player Mike Lindup’s falsetto backing vocals.

Having been a very successful live and studio band in the 1980s, Level 42’s commercial profile diminished during the early 1990s following a series of personnel changes and musical shifts. After disbanding in 1994, the band reformed in 2001.

Their most successful single was “Lessons in Love”, which reached number three on the UK Singles Chart, and number 12 on the US Billboard Hot 100 chart, upon its release in 1985.

Something About You
World Machine
Physical Presence
Leaving Me Now