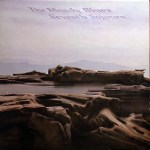 We had a bunch of British and Dutch imports to play, and we did hear some good sound, just not the kind of good sound we’ve heard on earlier albums. If you like this album we’re pretty sure you will have a hard time finding a copy that sounds even remotely this good. Most of them are much much worse. Dreadful in fact.

One more thing: the big hit from the album: I’m Just a Singer (In a Rock & Roll Band) did not sound good on any copy. The master went to make the single, and a dub was spliced onto the tape for the album.

… it was with the release of this album that the Moodies achieved their great commercial success in America and around the world, with a “Grand Tour” that kept them on the road for much of the year that followed.