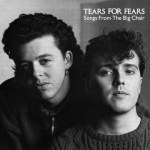 When you get a copy like this one, with superb extension up top, the grit and edge on the highs almost disappears. You can test for that quality on side one very easily with the percussive opening to Shout. If the harmonics and air are present at the opening, you are very likely hearing a top quality copy.

Side one here has smooth, sweet, analog richness and spaciousness I didn’t think was possible for this recording. The bass is full and punchy. When it really starts cooking, like in the louder, more dynamic sections of Shout or Mothers Talk, it doesn’t get harsh and abrasive like practically every other copy I’ve heard. It’s got energy and life, and it gets loud when it needs to without making your ears bleed.

There is wonderful transparency and presence in the vocals, not to mention a really deep soundstage. This copy trounced nearly all of the other pressings we played in terms of bringing the music to life while still keeping the aggressiveness of the presentation under control.

This is a CLASSIC in the Tears for Fears canon, probably the album most people regard as their best. I myself prefer Seeds of Love, which takes nothing away from Big Chair — it’s one of the top albums from the ’80s no matter how you look at it. It went to Number One on the charts for a reason. There’s really not a bad song on either side, and quite a few absolutely brilliant ones.

If The Hurting was mental anguish, Songs From the Big Chair marks the progression towards emotional healing, a particularly bold sort of catharsis culled from Roland Orzabal and Curt Smith’s shared attraction to primal scream therapy. The album also heralded a dramatic maturation in the band’s music, away from the synth-pop brand with which it was (unjustly) seared following the debut, and towards a complex, enveloping pop sophistication. The songwriting of Orzabal, Smith, and keyboardist Ian Stanley took a huge leap forward, drawing on reserves of palpable emotion and lovely, protracted melodies that draw just as much on soul and R&B music as they do on immediate pop hooks.

The album could almost be called pseudo-conceptual, as each song holds its place and each is integral to the overall tapestry, a single-minded resolve that is easy to overlook when an album is as commercially successful as Songs From the Big Chair. And commercially successful it was, containing no less than three huge commercial radio hits, including the dramatic and insistent march, “Shout” and the shimmering, cascading “Head Over Heels,” which, tellingly, is actually part of a song suite on the album. Orzabal and Smith’s penchant for theorizing with steely-eyed austerity was mistaken for harsh bombasticism in some quarters, but separated from its era, the album only seems earnestly passionate and immediate, and each song has the same driven intent and the same glistening remoteness.

It is not only a commercial triumph, it is an artistic tour de force. And in the loping, percolating “Everybody Wants to Rule the World,” Tears for Fears perfectly captured the zeitgeist of the mid-’80s while impossibly managing to also create a dreamy, timeless pop classic. Songs From the Big Chair is one of the finest statements of the decade.