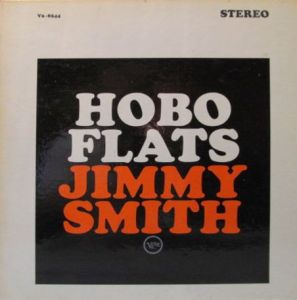 Both sides of this very special early stereo pressing are huge, rich, tubey and clear. As soon as the band got going we knew that this was absolutely the right sound for this music. There was practically nothing that could beat it, in any area of reproduction.

In the past we’ve complained about “echo-drenched brass” on some of these Oliver Nelson / Jimmy Smith collaborations, but on a killer copy such as this there is nothing to complain about. If you have a top quality front end (and the kind of system that goes with it), this recording will be amazingly spacious, three-dimensional, transparent, dynamic, and open.

In addition, when the top end is lacking, the upper midrange and high frequencies get jammed together — the highs can’t extend up and away from the upper mids. This causes a number of much-too-common problems that we hear in the upper midrange of many of the records we play: congestion, hardness, harshness, and squawk. (Painstaking VTA adjustment is absolutely critical if you want your records to play with the least amount of these problems, a subject we discuss in the Commentary section of the site at length.)

Creed Taylor was the producer, Bob Simpson the engineer, with Val Valentin acting as Director of Engineering (whatever that is) for these sessions from 1963. It’s yet another remarkable disc from the Golden Age of Vacuum Tube Recording.

Never heard a good one on this title. We stopped buying them a long time ago.

The Preacher
Meditation
I Can’t Stop Loving You

Playing piano-style single-note lines on his Hammond B-3 organ, Jimmy Smith revolutionized the use of the instrument in a jazz combo setting in the mid-’50s and early ’60s with his recordings for Blue Note Records. After he moved to Verve Records, though, he began working in more big-band settings, experimenting a bit, although he was always the same Jimmy Smith whose rapid runs on the B-3 careened, stuttered, glided, and flashed all over the place at a frequently breathless pace.

This set, recorded in 1963 in New York City, finds him working with arranger and conductor Oliver Nelson in a combined orchestral and big-band setting and what strikes first, aside from the movie soundtrack feel of Nelson’s arrangements…

Smith bubbles and bounces through all of it at the B-3 while Nelson proceeds to fill every available corner with huge, sweeping orchestral washes and crescendos. The clear highlight, though, is the lead and title track, “Hobo Flats,” which moves at a languid but wonderfully funky pace and establishes a groove as wide as the Mississippi River. Smith arguably was at his best in small combos, and at times he gets overwhelmed here by the big cinematic arrangements, but there’s plenty to like with this set, even if it’s a bit on the atypical side for Smith. It works well more than it doesn’t.