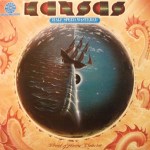 Both this album and Leftoverture are way too bright and thin.

What were the engineers thinking — that brighter equals better?

In the case of these two titles it most definitely is not. It’s the sound that most audiophiles are fooled by to this day.

Brighter and more detailed is rarely better. Most of the time it’s just brighter. Not many half-speed mastered audiophile records are dull. They’re bright because the audiophiles who bought them preferred that sound. I did too, a couple of decades ago[make that four decades ago].

Hopefully we’ve all learned our lesson by now, expensive and embarrassing as such lessons often turn out to be.

If your system is dull, dull, deadly dull, the way Old School systems tend to be, this record has the hyped-up sound to bring it to life in a hurry.

With an Old School Audio System, you will continue to be fooled by bad records, just as I and all my audio buds were fooled thirty and forty years ago. Audio has improved immensely in that time. If you’re still playing Heavy Vinyl and Audiophile pressings, there’s a world of sound you’re missing.

We discussed the issue in this commentary: Some Stereo Systems Make It Difficult to Find Better Sounding Pressings

My advice is to get better equipment and that will allow you to do a better job of recognizing bad records when you play them.