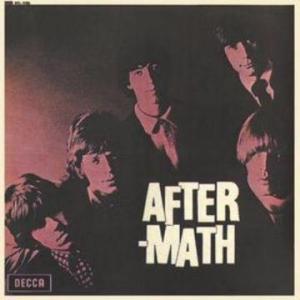 This wonderful British pressing of Aftermath has two AMAZING sides, one of which is obviously more amazing than the other, but still, amazing considering just how bad the average copy of this album sounds.

Until just recently it had been AGES since we’d found a copy of Aftermath with sound quality of this caliber to list on the site. It’s surprisingly clean, clear and smooth, with prodigious amounts of Tubey Magic, which is the kind of sound that lets you play the album at the appropriate volume — LOUD.

Under My Thumb ROCKS on this copy!

Although some songs sound amazing, not every track is well recorded. We just have to accept that the Stones are not The Beatles when it comes to the consistent quality of the earliest recordings. That said, a strong copy like this one paired with the great music on this album will certainly deliver a lot of pleasure to audiophile Stones fans.

This copy has big, open, spacious, natural sound. The vocals are clear and present and there’s great separation between the instruments. Most copies weren’t this rich, clear, or transparent. The bass is tight and punchy.

Lady Jane, Under My Thumb and Mother’s Little Helper are three of the best sounding tracks on side one — all three are lively and solid here.

On side two Out of Time and I Am Waiting are especially well recorded.

This is our favorite of the early Stones records. You can’t argue with Lady Jane and Under My Thumb, two of the best tracks this band ever put on tape.

Credit must go to the engineering talents of Dave Hassinger. You can read more about him in the link above.

Superb! On the best copies this track is so transparent you can feel the cool air of the studio.

Somewhat dark and compressed as a rule.

Wow! On the best pressings this one is killer. You won’t hear too many better sounding Stones songs from this period.

On the best copies this song has amazing bass. It’s what makes the song work, check it out.

Very nice sound as a rule.

Flight 505
High and Dry
Out Of Time

Wow — on the best copies the intro to this song is Demo Disc Quality (all things considered) but it gets compressed and harmonically distorted as they keep adding layers of tape.

Listen to that tape hiss — if it’s correct all the highs will be there.

This track can have especially sweet guitars.

Take It Or Leave It
Think
What To Do

The Rolling Stones finally delivered a set of all-original material with this LP, which also did much to define the group as the bad boys of rock & roll with their sneering attitude toward the world in general and the female sex in particular.

As a staff engineer at RCA’s Hollywood studios in the 1960s, David Hassinger worked on a number of important and classic recordings. The most famous of these, perhaps, are mid-’60s tracks that the Rolling Stones recorded in Hollywood, including the entirety of their 1966 album, Aftermath. They also include, however, the first two Jefferson Airplane albums, along with efforts by Sam Cooke, Love, the Monkees, the Byrds (their first attempt at “Eight Miles High,” re-recorded later for official release), Crosby, Stills, Nash & Young, and others. Hassinger also attempted to establish himself as a producer in the late ’60s, with limited success, most notably with the Electric Prunes and the first Grateful Dead album.

Hassinger’s work with the Rolling Stones was probably pivotal in expanding his musical and professional horizons. The Stones liked working in American studios, and during their mid-’60s tours in the States, they would often record in that country, including sessions at RCA in Hollywood. Hassinger first worked with them at the end of 1964, and did engineering on tracks that appeared on Out of Our Heads and December’s Children. He did all of Aftermath, even writing the liner notes. The palette of sounds and instruments on the record — marimbas, dulcimer, sitar, harpsichord, and fuzz bass — was a challenge for both the Stones and the producer (Andrew Oldham) and engineer.

(RCA) wasn’t as funky as Chess obviously but it was more commercial. And (Dave Hassinger) really… he had a good ear, he’d get good sounds, and we experimented with more instruments… And he’d always get good sounds so we’d always get a good take at 3 or 4 shots at a song.