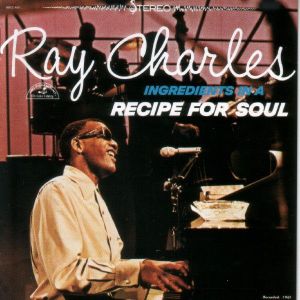 What the best sides of this Rhythm and Blues album from 1963 have to offer is not hard to hear:

Busted
Where Can I Go?
Born To Be Blue
That Lucky Old Sun
Ol’ Man River

Although it was a big commercial success, reaching number two on the LP charts, this record would typify the erratic nature of much of Charles’ ’60s output. It’s too eclectic for its own good, really, encompassing pop standards, lowdown blues, Mel Tormé songs, and after-hours ballads. The high points are very high — “Busted,” his hit reworking of a composition by country songwriter Harlan Howard, is jazzy and tough, and one of his best early-’60s singles, and the low points are pretty low, especially when he adds the backup vocals of the Jack Halloran Singers to “Over the Rainbow” and “Ol’ Man River.” A number of the remaining cuts are pretty respectable, like the tight big band arrangement of “Ol’ Man Time” and the ominously urbane “Where Can I Go?