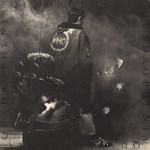 [These are old notes from many years ago. Take them with a grain of salt.]

Wow! This Universal Heavy Vinyl pressing from circa 2000 (the turn of the century!) is superb, not all that far from a good Track original, and quieter for sure.

Side One rocks incredibly hard from start to finish. What a great album. It has to rank right up there with the best rock of the ’70s, right behind Who’s Next and probably on a par with Tommy, good company indeed, since we LOVE all three of those albums here at Better Records. (Both Tommy and Who’s Next are Top 100 titles, but Quadrophenia is not far behind either of them for sound or music.

Here’s what we wrote about this pressing when it was still in print ten years ago (!).

Thank you Universal! We have almost forgiven you for the Cat Stevens records you ruined. With more great releases like this one, that debacle will fade one day from memory. (Although you can still buy those crappy pressings from my competitors. Have they no shame?)

As with any Who album, this is obviously not your average Audiophile Demo Disc. We don’t imagine you’ll be enjoying this one with wine, cigars, and polite conversation. This one is for turning up loud and rockin’ out — in other words, it’s our kind of record!

There’s a POWER to the sound that the average copy can only hint at. The crashing guitar chords that are the hallmark of The Who Sound lack the weight of the real thing; they don’t punch you in the gut the way Townsend no doubt wanted them to. Moons drums need to blast away like cannons. This is The Who’s sound. Everybody who’s ever seen them live knows it. (I saw them back in the day when Moon was still behind his kit and I’ll never forget it.)

The Music Is Wonderful

As with pretty much any double album, there’s a bit of filler here and there, but we were pleasantly surprised with this one’s consistency. This album has to rank right up there with the best rock albums of the ’70s, right behind Who’s Next and probably on a par with Tommy, good company indeed. Side one is particularly strong, rocking incredibly hard from start to finish.

Now if you want to play this record at 70 db, little of this discussion will make sense. There are some dumb ideas floating out there in Audiophile land, but this has to be one of the dumbest. Anybody who plays a record like Quadrophenia at moderate levels should be taken out and hosed down. How do you think Townsend went deaf, by playing his music too softly? He played his music LOUD because that’s the way he wanted you to hear it. Moon beats the hell out of his drums because he likes the sound of drums beaten HARD. If you don’t have the stereo to play this record right, don’t make excuses and DON’T make up bizarre theories about volume levels in the home. You’re not fooling anybody with those kinds of rationalizations. If your speaker distorts that’s your problem, pal. Don’t lay that trip on me.

Some of us have done our homework and take pride in what we’ve managed to accomplish. We’ve been challenging ourselves and our systems with records like Zep II and Aqualung for thirty years. We know how good these records can sound on systems that have what it takes to play them. If you’re not going to turn up the volume, don’t even bother with a monster like this.

Some of Townshend’s most direct, heartfelt writing is contained here, and production-wise it’s a tour de force, with some of the most imaginative use of synthesizers on a rock record. Various members of the band griped endlessly about flaws in the mix, but really these will bug very few listeners, who in general will find this to be one of the Who’s most powerful statements.