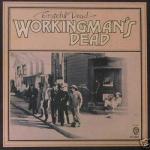 Jerry Garcia, discussing where the band’s thinking was at at the time, explained, “We were into a much more relaxed thing…and we were also out of our pretentious thing. We weren’t feeling so much like an experimental music group, but were feeling more like a good old band.”

Mickey Hart added, “I thought, what a wonderful thing – acoustic guitars. It was cold out there in the feedback, electric GD world. It was a great cold, a wonderful freeze, full of exploratory moments and great vision, but here we were exploring the soft side… I remember how warm and fuzzy it made me feel.

A lovely exploration of American roots music illuminating the group’s country, blues, and folk influences. The lilting Uncle John’s Band, their first radio hit, opens the record and perfectly summarizes its subtle, spare beauty; complete with a new focus on more concise songs and tighter arrangements, the approach works brilliantly. Despite its sharp contrast to the epic live space jams on which the group’s legend primarily rests, Workingman’s Dead nonetheless spotlights the Dead at their most engaging, stripped of all excess to reveal the true essence of their craft.

It’s so nice to receive a present from good friends.

Workingman’s Dead is an excellent album. It’s a warming album. And most importantly, the Dead have finally produced a complete studio album. The songs stand up quite nicely right on their own merits, which are considerable.

“Uncle John’s Band,” which opens the album, is, without question, the best recorded track done by this band. Staunch Dead freaks probably will hate this song. It’s done acoustically for a starter. No Garcia leads. No smasho drumming. In fact, it’s got a mariachi /calypso type feeling.

Finely, warmly-lush tuned guitar work starts it off, with a statement of the beat and feeling. When Garcia comes in with the vocal, joined by a lot of tracks of everyone else’s voices, possibly including his, it’s really very pretty. The lyrics blend in nicely with the music. “All I want to know/How does the song go?” “Come hear Uncle John’s band/playing to the tide/Come with me, or come alone/He’s come to take his children home.” Near the end of the song there is an a cappella section done by everyone, sounds like about 62 tracks, maybe 63. Just listen to it, and try not to smile.

The years of playing together have shown handsome dividends. “Dire Wolf” points this out. It’s a country song, Garcia’s steel guitar work is just right, and everyone sings along to the “Don’t murder me” chorus.

The country feeling of this album just adds to the warmth of it. “Cumberland Blues” starts off as a straight electric cut, telling the story of trying to make ends meet in bad times. Slowly, imperceptibly at first, a banjo enters the song. By the end, I was back at the old Gold Rush along with everyone else. The banjo brought me there.

Even the cuts that are not directly influenced by country stylings have a country feel to them. I suspect that this is due to, the band’s vocals. Living out on their ranch seems to have mellowed them all, or at least given a country tinge to their voices. “Casey Jones” is not the theme song you might remember from television. “Driving that train/High on cocaine/Casey Jones you better watch your speed.” Listen closely, especially to the cymbal work. Then listen to Phil Lesh’s bass mixing with Weir’s guitar. Now listen to the cymbal again. Yep. They did it. I don’t know who’s train is better, Casey’s or the Dead’s. Living sound effects. Just fine.

The Rhino reissues on heavy vinyl of the Dead records are absolutely awful. They have never been offered for sale at Better Records. You will, however, find them on all my competitors’ websites, and that is truly a disgrace. These reissues sound like bad cassettes. The CDs kill them. Anyone knowingly selling such shoddy product should be ashamed of themselves. Of course their excuse would be that they don’t play all the records they sell and therefore have no idea what they sound like. Then the question becomes: Who would want to buy records from someone like that anyway?

There’s an interesting story behind some of these Warner Brothers green label original pressings, which may explain why they are so hard to find with good sound. For a while in the early ’70s pressing plants got into the bad habit of “polishing” their metal stampers so that they would be more likely to produce quiet records. It produces quiet records all right — all the highs are wiped away along with the surface noise, much in the same way that modern de-noising programs for CD mastering takes out the highs as well as the hiss.

I found this out the hard way by buying some copies of Workingman’s Dead and American Beauty and being shocked at how dull sounding they were. There was nothing above 8K on these records! I have a wonderful sounding CD of Workingman’s Dead so I know there’s plenty of top end on the recording. And the Warner Brothers LP reissues have plenty of highs; they just don’t have the magic of the originals.

Eventually the pressing plants realized that polishing the stampers was doing more harm than good and they ended the practice. But not before lots of records were pressed with no top end.

So whenever I find one of these green label Dead records I always look at it with trepidation. I’ve been burned so many times that I refuse to pay too much for any copy that can’t be returned (which means any copy one might find on Ebay for example.)