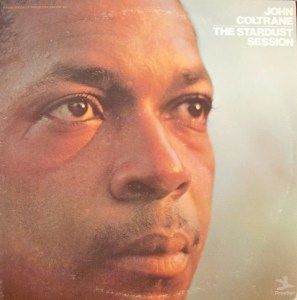 The record takes its material from three John Coltrane albums: ‘Bahia’, ‘Stardust’ and ‘Standard Coltrane.’ We would be surprised if the originals of any of them can beat the sound of this reissue.

The record takes its material from three John Coltrane albums: ‘Bahia’, ‘Stardust’ and ‘Standard Coltrane.’ We would be surprised if the originals of any of them can beat the sound of this reissue.

Note that the complete Standard Coltrane can be found on these four sides, along with a substantial portion of the other two Coltrane albums listed above.

This Prestige reissue is spacious, open, transparent, rich and sweet. It’s yet another remarkable disc from the Golden Age of Vacuum Tube Recording Technology, with the added benefit of mastering using the more modern cutting equipment of the ’70s. We are of course here referring to the good modern mastering of 30+ years ago, not the questionable modern mastering of today.

The combination of old and new works wonders on this title as you will surely hear for yourself on these incredibly Hot sides.

This leads me to think that most of the natural, full-bodied, lively, clear, rich sound of the album is on the tape, and that all one has to do to get that vintage sound on to a record is simply to thread up the tape on the right machine and hit play.

The fact that nobody seems to be able to make a record that sounds this good these days tells me that in fact, I’m wrong to think that such an approach would work. It just seems to me that somebody should have been able to figure out how to do it by now. In our experience that is simply not the case in the modern world of vinyl reissues, and has not been for many years.

What We’re Listening For on The Stardust Session

I’m A Dreamer, Aren’t We All
Love Thy Neighbour

Don’t Take Your Love From Me
My Ideal

Stardust
I’ll Get By (As Long As I Have You)

The eight standards here (which include the title cut, “Invitation,” “My Ideal,” and “I’ll Get By [As Long as I Have You]”) were originally scattered on three separate LPs even though they all took place on the same day. With strong support from the rhythm section (pianist Red Garland, bassist Paul Chambers, and drummer Jimmy Cobb) and good solos from flügelhornist Wilbur Harden, Coltrane is heard near the end of his “sheets of sound” period, perfecting his distinctive style and taking colorful and aggressive solos.

“Recorded July 11, 1958 at Rudy Van Gelder’s Studio in Hackensack, New Jersey, this album is aptly named “A Day in the Life of John Coltrane” because the entire contents of this double album were recorded in a single day. Originally available only on three separate LPs, this quintet session (featuring a hard-hitting Chambers-Cobb-Garland rhythm section) captures Coltrane at the top of his game, although he plays no original material. Coming to prominence in the mid-fifties as Miles Davis’ sideman, Coltrane’s own star quickly ascended (recorded just 9 months after his genre-busting “Blue Train” for Blue Note) and for a brief time burned brightly, hard to believe just 9 years later he’d be dead.”