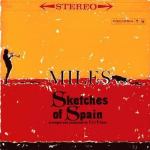 More of the Music of Miles Davis

When you get a Hot Stamper like this one the sound is truly MAGICAL. (AMG has that dead right in their review.) Tons of ambience, Tubey Magic all over the place; let’s face it, this is one of those famous Columbia recordings that shows just how good the Columbia engineers were back then. The sound is lively but never strained. Davis’s horn has breath and bite just like the real thing. What more can you ask for?

In previous commentary we had written:

Of course you can be quite sure that he would have been listening exclusively to the earliest pressings on the Six Eye label. Which simply means that he probably never heard a copy with the clarity, transparency and freedom from distortion that these later label pressings offer.

The Six Eyes are full of Tubey Magic, don’t get me wrong; Davis’s trumpet can be and usually is wonderful sounding. It’s everything else that tends to suffer, especially the strings, which are shrill and smeary on most copies, Six Eyes, 360s and Red Labels included.

Over the course of the last few years we’ve come to appreciate just how good the right Six Eye stereo pressing can sound.

In fact, the two copies earning the highest grades were both original stereo pressings. Other pressings did well, but none did as well as the originals. This has never been our experience with Kind of Blue by the way. The later pressings have always done the best job of communicating the music on that album.