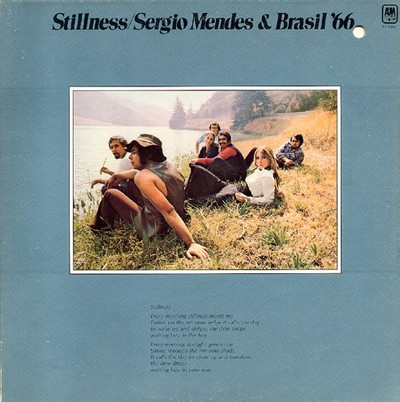 More of the Music of Sergio Mendes and Brasil ’66

Reviews and Commentaries for Stillness

If I had one song to play to show what my stereo can really do, For What It’s Worth on a Hot Stamper copy would probably be my choice. I can’t think of any material that sounds better. It’s amazingly spacious and open, yet punchy and full bodied the way only vintage analog recordings ever are.

This one being from 1970 fits the bill nicely.

To fail to make this record sound better is to fail completely. The production is so dense, and so difficult to reproduce properly, that only recently have I begun to hear just how good this record can sound. There is still plenty to discover locked in these grooves, and I enthusiastically accept the challenge to find all the sounds that Sergio created in the studio, locked away in the 40 year old vinyl.

Allow me to quote a length a wonderful review from Brasil66.com before we get into What to Listen For on Stillness.

A radical departure from anything that had gone before, Stillness remains the one album that Brasil ’66 fans either love or hate. Most complaints about it center on the fact that the familiar bossa sound of the earlier records was now mostly gone.

Nonetheless, Stillness is arguably one of the most fluid albums of Mendes’ career. It takes its cue from the work of many of the singer/songwriters of the day (Carole King, James Taylor, Joni Mitchell, etc.), with thoughtful lyrics and often delicate arrangements. It is a almost a concept album, with the theme expressed in the title song — the words of which are even printed on the front cover — and an outdoorsy, peaceful feeling running through many of the other lyrics. (This feeling is also reflected in the cover photos, which were shot in a rural setting.)

Stillness is also Lani Hall’s final album with Mendes; she left the group during these sessions and was replaced by Gracinha Leporace, who does lead vocals on several songs. Standout tracks include “Chelsea Morning” and “Viramundo,” both of which contain traces of the earlier Brasil ’66 sound; “Righteous Life” and Buffalo Springfield’s “For What It’s Worth,” both of which reflect the mood of late ’60s America through their lyrics; and the very pretty “Sometimes in Winter,” featuring an elegant orchestral arrangement by Dick Hazard.

This is my favorite song on side one. Sergio Mendes magic at its best, with Demo quality sound.

The real test for side one. Without a doubt it’s the hardest song to get to sound right on the entire album. Only certain stampers have the potential and not all of them have the kind of balanced, natural sound that allows the song to work. There’s a certain hardness to the piano on most copies that doesn’t sit right. On the best pressings the piano sounds correct and natural, no doubt the way it was recorded. Why the piano on this track is so difficult to reproduce is beyond me.

This track features a room full of Latin percussionists with some of the sweetest female vocals ever recorded layered over them. Another Demo Disc quality track.

This is a very difficult track. I never really appreciated how wonderfully different it is from most of Sergio Mendes’ music. I’ve grown to love it. The original version by Brazilian great Caetano Veloso is excellent as well and worth seeking out.

For What It”s Worth

Demo Disc quality sound. This is the track that blows everybody’s mind. The percussion alone is worth the price of admission. Sergio and his merry band take this music in a completely fresh direction, making a version that holds its own against the classic original by Buffalo Springfield. And that’s saying something.

Another case where Sergio completely reinvents a familiar song, previously done superbly by another band. Who does it better? He’s practically unique in his ability to improve upon a song that was wonderful to start with.

Celebration of the Sunrise
Stillness

Stillness is one of my favorite records of all-time. The material here is some of the best that Sergio and his crew ever recorded. The sound is AMAZING. The average copy of this is no great shakes. Copies like this are MAGIC. It’s a Desert Island disc for me. I discovered this record one day by accident and now all my friends are constantly on the lookout for copies, it’s that good.

If you already have a copy of this album, it’s possible, but not likely, that your copy is out of absolute phase on at least one side. With the help of our EAR 324 Phono Stage we were able to easily confirm which stampers are in correct phase and which are not.

Those out-of-phase copies can sound good, not great, either way, but really only work if you reverse your absolute phase. We used to do it the old-school way, by switching positive and negative at the headshell leads.

These days we simply press a button on the 324, a feature which comes in particularly handy on a record like Stillness, where some stampers are reversed phase while others are not. Feel free to drop us a note with your stamper numbers and we’ll let you know if your copy has correct phase or not.