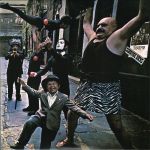 This a Must Own Record, a 1967 recording with unbelievable RAW POWER. Most audiophiles very likely have no idea how well recorded this album is, simply because most pressings don’t do a very good job of translating the energy and life of the master tape onto the vinyl of the day.

The second Doors album is without a doubt one of the punchiest, liveliest, most POWERFUL recordings in the entire Doors catalog, right up there with their debut.

I’m guessing this statement does not comport with your own experience, and there’s a good reason for that: not many copies of the album provide evidence of any of the above qualities. Most pressings are opaque, flat, thin, veiled, compressed and lifeless. They sound exactly the way so many old rock records sound: like any old rock record.

You would be much better off with the DCC Gold CD than any of the reissue vinyl we’ve played.

But this album is engineered by Bruce Botnick. The right pressings give you the kind of low-end punch and midrange presence you hear on Love’s first album (when you play the right gold label originals). Botnick engineered them both, and what’s even more amazing is that The Doors second is in many ways an even better recording than Love’s!

But the thing that caught us most by surprise is how much LIFE there is in the performances on the better Hot Stamper copies. Morrison pulled out all the stops on songs like Love Me Two Times and the last track on the album, When the Music’s Over. Unless you have a very special pressing there is almost no chance you will ever hear him with this kind of raw power.

Top 100? If we could find more than a sporadic few clean, good sounding copies each year it would surely make the list, joining the other three of the band’s first four albums on there now.