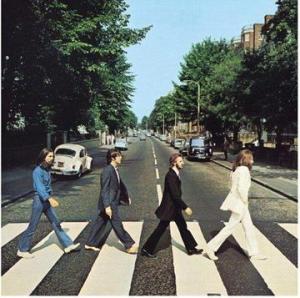 Another in our series of Home Audio Exercises with advice on What to Listen For (WTLF) as you critically evaluate your copy of Abbey Road.

Those of you who follow the site (or do your own shootouts) know that it’s much tougher to find great copies of Abbey Road than it is for MMT or Please Please Me. Most of the copies we’ve played just aren’t good enough to put on the site. For whatever reasons — probably because this recording is so complicated and required so many tracks — Abbey Road is arguably the toughest nut to crack in the Beatles’ catalog.

Most of the copies we’ve played over the years suffer from too much grit and grain, particularly on the vocals. Not the best ones though. We just couldn’t believe how smooth and sweet the vocals were on our shootout winner last time around, especially on side two, without sacrificing any breath or texture.

The Power of Abbey Road

This is the final statement from The Beatles. To take away the power of this music by playing it through inadequate equipment makes a mockery of the monumental effort that went into it. Remember, the original title for the album was Everest. That should tell you something about the size and scope of the music and sound that the Beatles had in mind.

We have a large number of entries in our new Listening in Depth series.

We have a section for Audio Advice of all kinds.

Simply, side two does more for me than the whole of Sgt. Pepper, and I’ll trade you The Beatles and Magical Mystery Tour and a Keith Moon drumstick for side one.

So much for the prelims. “Come Together” is John Lennon very nearly at the peak of his form; twisted, freely-associative, punful lyrically, pinched and somehow a little smug vocally. Breathtakingly recorded (as is the whole album), with a perfect little high-hat-tom-tom run by Ringo providing a clever semi-colon to those eerie shooo-ta’s, Timothy Leary’s campaign song opens up things in grand fashion indeed.

George’s vocal, containing less adenoids and more grainy Paul tunefulness than ever before, is one of many highlights on his “Something,” some of the others being more excellent drum work, a dead catchy guitar line, perfectly subdued strings, and an unusually nice melody. Both his and Joe Cocker’s version will suffice nicely until Ray Charles gets around to it.

Paul McCartney and Ray Davies are the only two writers in rock and roll who could have written “Maxwell’s Silver Hammer,” a jaunty vaudevillian/music-hallish celebration wherein Paul, in a rare naughty mood, celebrates the joys of being able to bash in the heads of anyone threatening to bring you down. Paul puts it across perfectly with the coyest imaginable choir-boy innocence.

Someday, just for fun, Capitol/Apple’s going to have to compile a Paul McCartney Sings Rock And Roll album, with “Long Tall Sally,” “I’m Down,” “Helter Skelter,” and, most definitely, “Oh! Darling,” in which, fronting a great “ouch!”-yelling guitar and wonderful background harmonies, he delivers an induplicably strong, throat-ripping vocal of sufficient power to knock out even those skeptics who would otherwise have complained about yet another Beatle tribute to the golden groovie’s era.

That the Beatles can unify seemingly countless musical fragments and lyrical doodlings into a uniformly wonderful suite, as they’ve done on side two, seems potent testimony that no, they’ve far from lost it, and no, they haven’t stopped trying.

No, on the contrary, they’ve achieved here the closest thing yet to Beatles freeform, fusing more diverse intriguing musical and lyrical ideas into a piece that amounts to far more than the sum of those ideas.

“Here Comes the Sun,” for example, would come off as quite mediocre on its own, but just watch how John and especially Paul build on its mood of perky childlike wonder. Like here, in “Because,” is this child, or someone with a child’s innocence, having his mind blown by the most obvious natural phenomena, like the blueness of the sky. Amidst, mind you, beautiful and intricate harmonies, the like of which the Beatles have not attempted since “Dr. Robert.”

Then, just for a moment, we’re into Paul’s “You Never Give Me Your Money,” which seems more a daydream than an actual address to the girl he’s thinking about. Allowed to remain pensive only for an instant, we’re next transported, via Paul’s “Lady Madonna” voice and boogie-woogie piano in the bridge, to this happy thought: “Oh, that magic feelin’/Nowhere to go.” Crickets’ chirping and a kid’s nursery rhyme (“1-2-3-4-5-6-7/All good children go to heaven”) lead us from there into a dreamy John number, “Sun King,” in which we find him singing for the Italian market, words like amore and felice giving us some clue as to the feel of this reminiscent-of-“In My Room” ballad.

And then, before we know what’s happened, we’re out in John Lennon’s England meeting these two human oddities, Mean Mr. Mustard and Polythene Pam. From there it’s off to watch a surreal afternoon telly programme, Paul’s “She Came In Through the Bathroom Window.” Pensive and a touch melancholy again a moment later, we’re into “Golden Slumbers,” from which we wake to the resounding thousands of voices on “Carry That Weight,” a rollicking little commentary of life’s labours if ever there was one, and hence to a reprise of the “Money” theme (the most addicting melody and unforgettable words on the album). Finally, a perfect epitaph for our visit to the world of Beatle daydreams: “The love you take is equal to the love you make …” And, just for the record, Paul’s gonna make Her Majesty his.

I’d hesitate to say anything’s impossible for him after listening to Abbey Road the first thousand times, and the others aren’t far behind. To iy mind, they’re equatable, but still unsurpassed.