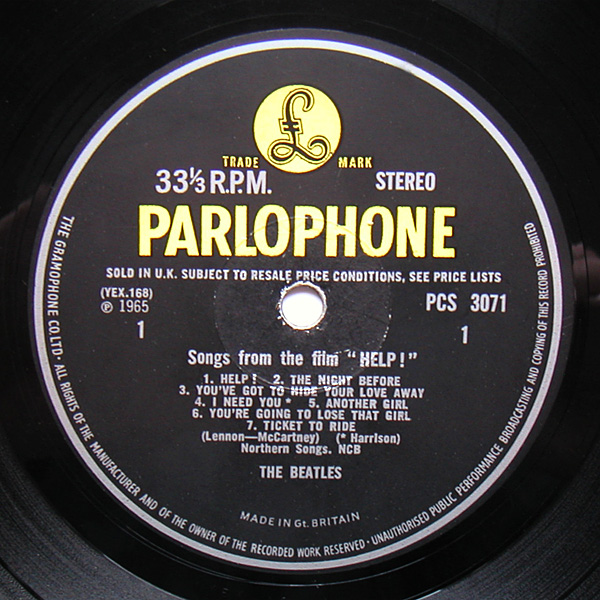 Back in 2005 we compared the MFSL pressing of Help to a British Parlophone LP and were — mistakenly, as you may have already surmised — impressed by the MoFi.

Mobile Fidelity did a GREAT JOB with Help!. Help! is a famously dull sounding record. I don’t know of a single original pressing that has the top end mastered properly. Mobile Fidelity restored the highs that are missing from most copies.

The source of the error in our commentary above is in this sentence, see if you can spot it:

I don’t know of a single original pressing that has the top end mastered properly.

Did you figure it out? If you’ve spent much time on our site of course you did.

Is that the standard?

The domestic original Capitol pressings are awful and the original British import pressings of Help NEVER have any real top end. The Yellow and Black Parlophone pressings have many wonderful qualities, Tubey Magic for days being one of the most pleasurable, but frequency extension up top is not among them. Neither is tight, articulate bass. The old tube cutting systems just didn’t have what it takes to cut the highs and lows well. The middle may be glorious, but the rest of the frequency spectrum is a mess.

Now if you’re an Audiophile Record Collector — and by that I mean an Audiophile who is also a Record Collector, not a person who collects Audiophile Records — you may have been told that the original British pressings of The Beatles albums are the best way to hear their wonderful music. They are not. Any Hot Stamper pressing of The Beatles will eat those originals for lunch. The originals are simply not a very good representation of what is really on the master tape, and a good reissue — the kind we sell all day long — should easily convince you of that fact once the needle gets going in the groove. This should not take long.

If you own some of these early Parlophone pressings and they sound “right” to you, however you choose to define that term, then you have problems that extend well beyond The Beatles. There is simply no way a modern, serious audiophile system can play those early imports without exposing their flaws. If you have what we like to call an Old School Audio System, the kind that you could buy twenty or thirty years ago, then your early Parlophones might sound just fine to you. But you sure don’t know what you’re missing.

Audio has come a long way. If you love The Beatles’ music you owe it to yourself to upgrade, tweak or modify your system and listening room sufficient to take it to a higher level, a level that will let you hear more of what the boys actually recorded. Not what an “old stereo” will let you hear, but what’s really on those amazing almost fifty year old tapes. That’s the sound that we hear every day on the vinyl we play. There’s no reason that you can’t too.