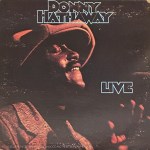 This live recording has YOU ARE THERE sound! It’s so natural, rich and transparent, what is there to fault? The soundstage is wide and deep. Within moments of the needle hitting the groove your speakers disappear and the music just flows into the room. On the best original domestic pressings you can immediately understand and appreciate the honest, emotive sound that made Donny Hathaway the tremendous performer he was known to be.

I’ve been playing this record regularly since I first heard it back in the mid-’90s and even after twenty years it has never failed to thrill. If I could take only one soul album to my desert island, it would be this one, no doubt about it.

Pay close attention to the audience chatter and clapping. Most copies, being compressed and veiled, have no hope of reproducing the handclaps and audience shout-outs correctly. Only those copies with transparency and presence let you “see” the crowd properly.

But don’t be fooled by thinner, leaner sounding copies. There is tons of low end and lower midrange in this recording — it’s one of its prime strengths, and it’s what it would have sounded like if you were there — so make sure you have plenty going on in the lower frequencies before you start evaluating the audience participation. Many audiophile recordings are leaner and cleaner, producing a phony kind of transparency and detail at the expense of the fullness and richness of the recording. This is almost never a good thing.

The copies where the congas are up-front, punchy and full-bodied were the ones where the rhythmic energy really carried the day. You know it when you hear it, that’s for sure. Most copies failed in this regard to some degree. If you have more than one copy, focus on just this one element and see if you don’t hear quite a bit more energy on the copies with more prominent, solid-sounding congas.

The currently in-print 180 gram pressing is not very good and should best be avoided. It’s also pressed on noisy vinyl and often warped.