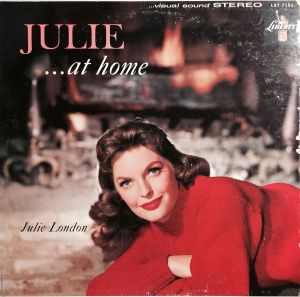 If you’re a fan of intimate female vocals – the kind without a trace of digital reverb – you should get quite a kick out of Julie… At Home. And unless I miss my guess you’ll be the first and only person on your block to own it! (That’s not a bad thing considering the average person’s taste in music.)

Need a refresher course in Tubey Magic after playing too many modern recordings or remasterings? These Liberty pressings are overflowing with it. Rich, smooth, sweet, full of ambience (or at least as much ambience as can be heard in Julie’s living room), dead-on correct tonality — everything that we listen for in a great record is here.

This record is the very definition of Tubey Magic. No recordings will ever be made that sound like this again, and no CD will ever capture what is in the grooves of this record. There actually is a CD of this album, and youtube videos of it too, but those of us with a good turntable could care less.

Copies with rich lower mids and nice extension up top did the best in our shootout, assuming they weren’t veiled or smeary of course. So many things can go wrong on a record. We know, we heard them all.

The mono pressing we had to play in our shootout did better than we expected, at least it did on side two. Side one was a bit hard in the midrange and of course mono has a tendency to take the fun out of a record by collapsing the soundstage and jamming all the players into the middle.

Our mono side two showed us a big, rich, present Julie London that we did not expect to hear, and that even the best stereo pressings could not beat. If they all sounded that good — on both sides — we might find ourselves whistling a different tune about mono, but for now it seems that the stereo is the way to go.

Everyone feels relaxed and at ease in a warm home atmosphere. That’s why Julie London and Liberty Records decided to record this album in Julie’s own living room away from the formality of a recording studio. Because of these relaxed surroundings and the fact that Julie’s talent as a hostess is only exceeded by her talent as a musician, I have never been associated with a more pleasant recording session.

Everything about this album was enjoyable and satisfying from a musical standpoint. To begin with, Julie is wonderful to work with. Everyone around her responds to that intimate, relaxed feeling. And she uses her voice like an instrument–warm and easy without self-consciousness.

The wonderful choice of musicians also had a great deal to do with making this a rewarding experience. Standout musicians like Al Viola, Earl Palmer, Don Bagley, Emil Richards and Bob Flanagan can be counted on to make a real contribution to the musical mood or feeling of a record. They inspire the confidence of the singer and each other.

Each of the two sessions began in the afternoon and continued until everyone was happy with the results. I might add that being greeted at the door by lovely Julie London and ushered into a warm and beautiful living room is my idea of the right way to start every record session. We all talked over what we were going to do while we were warming up. We would play for a while and then talk about it. Everybody contributed to the discussions and we’d try out their ideas. Every once in a while we’d stop for refreshments, shoot the breeze a little and then go back to work…this is work?!

It’s small wonder, then, that this album contains some pretty inspired music, always relaxed so as to point up Julie’s great vocal work. If we’d been any more relaxed we couldn’t have moved.

On the first date, after most of the men had gone home, Al Viola stuck around for a while. Julie and Al got to trying out a couple of ideas by themselves on “Everything Happens to Me” and “You’ve Changed.” They turned out so great that these two tunes were released in the album just as they were…just Julie and guitar. The second evening Bob Flanagan dropped by to pay a social call. We talked him into getting his horn out of the car and he “sat in” with some nice trombone work.

It has become a cliche in show business to say, “I hope you enjoy this as much as we enjoyed doing it.” In the case of this album I can wholeheartedly say it and mean it. In fact, I enjoyed myself so much that I almost feel guilty about accepting the check.

In 1959, sultry vocalist Julie London was really coming into her own as a singer. Her worldwide hit “Cry Me a River” was four years behind her, and while she would never attain that level of fame as a recording artist for the rest of her career, her ability to interpret a song was at its strongest in the late ’50s and early ’60s.

Liberty Records’ Julie…At Home finds the vocalist comfortably in front of a small jazz combo highlighted by vibraphonist Emil Richards and guitarist Al Viola. The sessions seem relaxed and casual, often with the lyrics slyly slipping from London’s lips, at once sophisticated and sensual. The remarkable thing about Julie…At Home is that it was in fact recorded in her own living room, which proved to be the ideal surroundings for these warm and romantic standards.