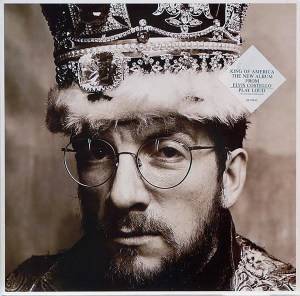 Even though the album was recorded right here in the states, the domestic copies are clearly made from dubs, sounding quite a bit more opaque, vague, closed-in, flat and dry than most of the British pressings we played. Like most Costello albums on domestic vinyl, they should be avoided.

Of course, I and all my friends, at least the ones who were into Elvis at the time, had a copy with exactly this kind of mediocre sound and we liked it just fine. Now, thirty years on, I couldn’t sit through that kind of sound with a gun to my head.

Setting higher standards for yourself — consciously or unconsciously, the process works both ways — is an important aspect of becoming a more critical listener. Many of the Heavy Vinyl audiophile remasters sound “opaque, vague, closed-in, flat and dry” next to the best Hot Stamper pressings, but if you’ve never heard one, how would you know what you’re missing?

Mint Minus to Mint Minus Minus is about as quiet as any UK pressing will play, and since only the right imports have any hope of sounding good on this album, that will most often be the playing condition of the copies we sell. (The copies that are even a bit noisier get listed on the site are seriously reduced prices or traded back in to the local record stores we shop at.)

If you want to make the trade-off between bad sound and quiet surfaces with whatever Heavy Vinyl pressing might be available, well, that’s certainly your prerogative, but we can’t imagine losing what’s good about this music — the size, the energy, the presence, the clarity, the weight — just to hear it with less background noise.]

Stripping away much of the excess that cluttered Punch the Clock and Goodbye Cruel World, Elvis Costello returned to his folk-rock and pub rock roots with King of America, creating one of his most affecting and personal records.

Costello literally took on the album as a return to roots, billing himself by his given name Declan MacManus and replacing the Attractions with a bunch of L.A. session men (although his old band appears on one cut), who give the album a rootsy but sleek veneer that sounds remarkably charged after the polished affectations of his Langer/Winstanley productions.

And not only does the music sound alive, but so do his songs, arguably his best overall set since Trust. Working inside the limits of country, folk, and blues, Costello writes literate, introspective tales of loss, heartbreak, and America that are surprisingly moving — he rarely got better than “Brilliant Mistake,” “Glitter Gulch,” “American Without Tears,” “Big Light,” and “Indoor Fireworks.”

What separates King of America from the underrated Almost Blue is that Costello’s country now sounds lived-in and worn, bringing a new emotional depth to the music, and that helps make it one of his masterpieces.

During late 1984 and early 1985, Costello undertook a series of solo tours, sharing the bill with musician T-Bone Burnett. Costello and Burnett recorded a single together in early 1985, and ventured to imagine appropriate backing musicians for Costello’s new songs. They booked time at Ocean Way and Sunset Sound studios in Los Angeles, and assembled members of the TCB Band who had backed Elvis Presley in the 1970s (Costello being more familiar with their work on records by Gram Parsons and Emmylou Harris).

Other sessions included the jazz bassist Ray Brown and New Orleans drummer Earl Palmer, and a group of musicians dubbed ‘the Confederates,’ featuring T-Bone Wolk, Mickey Curry, and producer Mitchell Froom. Elvis’s usual backing musicians the Attractions appear on only one track, “Suit of Lights”, but returned to record in full Costello’s next album, Blood & Chocolate.

In the album credits, Costello uses three different noms de plume for himself: his given name of Declan MacManus; his stage name of Elvis Costello; and the nickname awarded him by producer Nick Lowe earlier in his career; the Little Hands of Concrete, the last being a reference to his habitual breaking of guitar strings during recording sessions.

The version of the 1964 song by Nina Simone “Don’t Let Me Be Misunderstood” was released a single, and peaked at #33 on the UK singles chart.