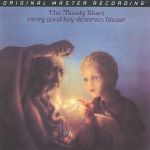 Pure Anadisc murky mud, like all the Moody Blues records MoFi remastered and ruined in the ’90s with their misbegotten foray back into the world of vinyl. By 1999 they were bankrupt and deservedly so.

Their records were completely worthless to those of us who play them and want to hear them sound good but, unsurprisingly, a quick search on ebay indicates that they’re still worth money to those who collect the kind of audiophile trash this label put out.

Folks, seriously, you really have to work at it to find pressings of the Moody Blues albums that sound worse than the ones MoFi did in the ’90s. To be honest, we really don’t know of any. Which means that, as far as we’re concerned, their pressing of Every Good Boy Deserves Favour is the worst version of the album ever made.

Visit our Audiophile Hall of Shame (270+ strong) to see what, in our opinion, are some of the worst sounding records ever made that were marketed to audiophiles.

Over the many decades we have been in the audiophile record business, we’ve gone through the all-too-often unpleasant experience of comparing these audiophile pressings head to head with our best Hot Stampers.

When you can hear them that way, up against an exceptionally good record, their flaws become that much more obvious and, frankly, much less tolerable.

What Exactly Are Hot Stamper Pressings?

Even as recently as the early 2000s we were still somewhat impressed with many of the better Heavy Vinyl pressings. If we had never made the progress we’ve worked so hard to make over the course of the last twenty or more years, perhaps we would find more merit in the Heavy Vinyl reissues so many audiophiles seem to like.

We’ll never know of course; that’s a bell that can be unrung. We did the work, we can’t undo it, and the system that resulted from it is merciless in revealing the truth — that these newer pressings are second-rate at best and much more often than not third-rate and even worse.

After playing some of the worst of the worst of these audiophile pressings, I was pissed off enough to create a special list for them. If you have any of these titles in your collection, now is the time to hear just how bad they are and to get rid of them.

Setting higher standards — no, being able to set higher standards — in our minds is a clear mark of progress. Judging by the hundreds of letters we’ve received, especially the ones comparing our records to their Heavy Vinyl and Half-Speed Mastered counterparts, we know that our customers see things the same way.