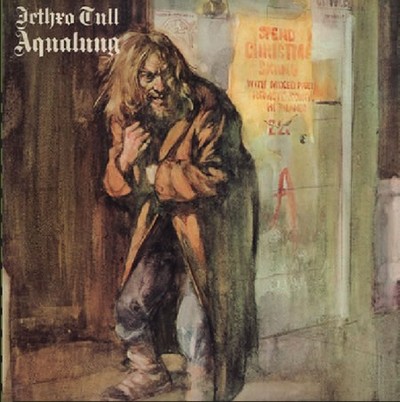 … who seems to have a rather nasty bronchial condition…

Like Heart’s Little Queen album, Aqualung presents us with a Demo Disc / Test Disc that really puts a stereo through its paces, assuming it’s the kind of stereo that’s designed to play an album like Aqualung.

Not many audiophile systems I’ve run across over the years were capable of reproducing the Big Rock Sound this album requires, but perhaps you have one and would like to use the album to test some of your tweaks and components. I used it to show me how bad sounding some of the audiophile wire I was testing really was.

Here’s what I wrote:

A quick note about some wire testing I was doing a while back. My favorite wire testing record at the time (2007)? None other than Aqualung!

Here’s why: Big Whomp Factor. Take the whomp out of Aqualung and the music simply doesn’t work, at all. To rock you need whomp, and much of Aqualung wants to rock.

But not all of it. Some of it is quite pretty, so you must make sure to preserve the breathy flutes and recorders, and the delicate harmonics in the strummed acoustic guitar parts. That’s more or less the job of the top end; the whomp is the bottom end’s job. There’s no real mystery to either of those sonic elements.

But the third quality Aqualung has that makes it an ideal test disc is the slightly honky midrange it has in places, especially in the “singing through a telephone” break in the middle of the title track. Why is this important? Simply because many audiophile wires lean out the lower midrange and boost the upper midrange, which adds “clarity” and “detail” to the sound.

It’s not always easy to tell that that’s what’s really happening if you play the typical audiophile test record (whatever that may be. I don’t use them but others do.) On Aqualung that extra boost in the voice is positively deadly. It already has a little problem there, so if that problem gets worse, it quickly becomes obvious.

The phony “presence” of most audiophile wire is exactly what Aqualung helps to guard against, because Aqualung doesn’t need any more presence. It needs rich, full-bodied, punchy sound, with plenty of weight from 250 hz on down. These are qualities found in few audiophile interconnects or speaker wires in my experience. Come to think of it, none of the audiophile wires I’ve tried in the last two or three years would pass the Aqualung test. (I used different recordings before the recent discovery of the Hot Stamper Aqualung, but the recordings I used all showed up the same problems in wire after wire.)

Wire shootouts are very frustrating. Most wires do wonderful things in some part of the frequency spectrum — that’s why their inventors and proponents love them so much. They are often highly resolving and amazingly transparent.

But what they give with one hand they take away with the other — leaning out the sound, transforming rock records that used to really rock into rock records that kinda rock. When that happens I put them in their fancy boxes and ship them back to whence they came.

Here’s an idea. Next time you want to test some audiophile wire, invite your non-audiophile friends over to hear Aqualung with the new wires. My guess is they’re less likely to be fooled by the wire’s tricks than we audiophiles are. They’ll know when the music works and when it doesn’t; you’ll be able to see it on their faces.

It’s easy to lose sight of what this hobby is all about when the money and the egos and the “new improved technologies” all get mixed up with the sound. Fortunately Aqualung doesn’t care about all that crap. That’s why it’s good to keep him around.