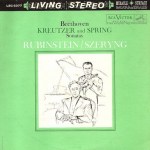 [This commentary was written years ago, not sure if this is still true.]

The Shaded Dog original RCA pressings are the best, right?

Not in our experience. We think that’s just another Record Myth.

In this listing for one of our Hot Stamper 2-packs we compare the sound of the originals (which tend to be crude, veiled, recessed and a bit smeary) with the reissues, which can be awful or wonderful depending on which side of which copy you are playing.

OUR COMMENTARY FROM WAY BACK

This Red Seal Super Hot stamper Two-Pak may comprise reissue pressings, late ones even, but the sound is SUPERB. And with a Two-Pak, you get two great sides (just not on the same records of course). The immediacy of the violin was shockingly good; it was Right There, solidly between the speakers, the kind of sound that left the vast majority of pressings we’ve played of LSC 2377 in the dust. (Including the sound on the “bad” sides, which are mediocre at best.)

Add to that some of the sweetest, richest, most “rosiny” violin tone we’ve had the good fortune to hear, along with tonality that is as close to perfection as imaginable, and you have yourself one helluva great sounding work for piano and violin. The performances are extraordinary as well, as you might imagine from the likes of Szeryng and Rubinstein.

How They Break Down

First up, the Shaded Dog. Tubey-Magical, of course, that goes without saying. Also crude, veiled, recessed and a bit smeary. Old tube cutting equipment was helping the sound in some ways, hurting it in others. This is the kind of sound most audiophiles would expect to hear on an original Shaded Dog; most would probably be fairly pleased by such a pressing.

But once you’ve heard the record cut right, that sound just will not do. Both of the good sides of the red seal pressing are correct and real in a way that the Shaded Dog was not.

A++, zero smear, never harsh or hard, this side is very real and above all involving.

Side two of this copy is thin, hard and shrill, the kind of sound one might expect from a reissue.

A++, rich, full and natural – so relaxed and enjoyable.

Side one of this copy is thin and hard.

RCA is justly famous for its chamber recordings, which tend to be somewhat rare for some reason. Let’s be honest: we did not conduct this shootout with a dozen copies of the album. It would take us five years to find that many clean pressings. We had exactly four as a matter of fact: a reference shaded dog, two red seals, and the Cisco Heavy Vinyl reissue of LSC 2577 (admittedly a different recording) from a few years back. We also had some other Heifetz RCA recordings, including some superb copies of LSC 2603, one of the top Heifetz titles.

We’ve played dozens and dozens of good violin recordings. We have no problem recognizing good violin sound when we hear it. In the past our top Hot Stamper classical pressings would go directly to our best customers, customers who want classical recordings that actually sound good. not just the kind of Golden Age Recordings that are supposed to.