Even in the Quietest Moments 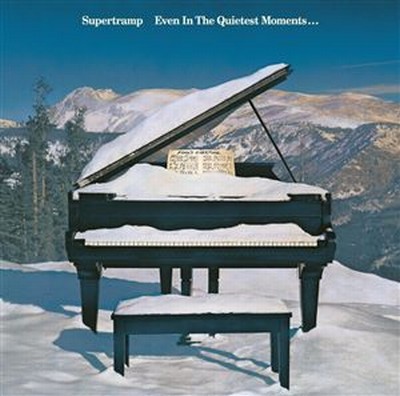 The story behind this record is what real Progress in Audio is all about.

We wrote up this album in 2005 as a Hot Stamper Stalled listing; we just couldn’t find anything that really sounded right to us. The imports were a smeary mess, the half-speed was and is a complete joke (we used to like it but that just goes to show how wrong you can be), and the domestic copies were so grainy and phony-sounding we knew there was no way to make the case that this was some sort of audiophile recording.

Could it be that when Geoff Emerick took over the recording duties from his friend Ken Scott, who had engineered the two previous albums, both of which are stunning — Crime of the Century and Crisis? What Crisis? — he had simply dropped the ball and done a bad job? How could that be possible?

This is the man responsible for some of the greatest pop recordings ever made — practically the entire Beatles catalog for starters, and plenty more besides.

As is so often the case, it takes two things to show you the error of your ways. One is the right stereo. It has to be able to show you what is really on the record you’re playing, and this means a high quality front end; the best electronics, speakers and all the rest, not to mention a good room, treatments, clean electiricity and too many other things to get into here.

The second is the right record, properly cleaned of course. You may have put together the best stereo in the world but that won’t keep a bad pressing from making this music sound awful, and the world seems to be full of bad pressings of Even in the Quietest Moments. And when we say “the world”, we mean exactly that: every country in the world produced bad pressings of this album. It may come as a bit of a shock to most audiophiles, but as far as we can tell only one country produced good ones: the good old U S of A. (For those of you who have purchased a Hot Stamper of Breakfast in America, or done plenty of shootouts with pressings from around the globe, the same is true for that album. Nothing but common, cheap, domestic LPs have any hope of sounding good.)

But this is such wonderful music we had to keep trying. I grew up on this album; the first Supertramp album I even bought was Crisis? What Crisis?, which I quickly fell in love with, and it wasn’t long before this one followed in 1977. It too became a staple of my musical diet. Man I played this record till the grooves were smooth.

I thought the sound was killer at the time too! Crisis was a demo disc at my house and this was right up there with it. Now the obvious question is, did I have a good sounding copy, or did my stereo not reveal to me the shortcomings of my LP? Or maybe my ears were not well enough trained to hear what was wrong. Those of you who have been doing this for a long time know the answer: any or all of the above, and nobody can know which.

And now, with your better stereo and better ears, when you drop the needle on some copy you picked up of Even in the Quietest Moments, expecting to hear the glorious sound you remember from your youth, it’s a huge letdown — so grainy, thin, and edgy, with blurry bass. On top of that the whole sordid mess is stuck somewhere back behind the speakers, like the sound you hear from an old cassette.

It’s not the record you remember, that’s for sure.

So now the half speed sucks when it used to sound good. (Such is the case with practically all audiophile records; the better you get at listening the worse they sound.)

And now, with your better stereo and better ears, when you drop the needle on some copy you picked up of Even in the Quietest Moments, expecting to hear the glorious sound you remember from your youth, it’s a huge let down. It’s so grainy, thin and edgy, with blurry bass, stuck somewhere back there behind the speakers. It’s not the record you remember, that’s for sure.