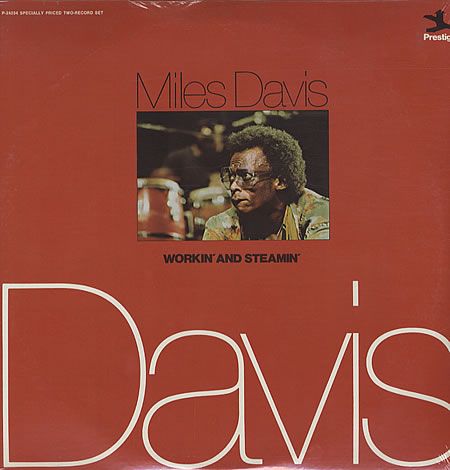 To the Jazz Fans of the World, we here present one of the BEST sounding jazz recordings we have ever had the PRIVILEGE to place on a turntable. I cannot ever recall hearing a better sounding Rudy Van Gelder recording, and I have a theory as to why this tape is as good as it is: it’s MONO. It also sounds like it’s recorded completely LIVE in the studio, direct to one track you might say. As good a recording as Kind of Blue is, I think the best parts of this album are more immediate and more real than anything on KOB.

See all of our Miles Davis albums in stock

Better than the Originals?

The record combines two Miles Davis albums recorded in 1956: Workin’ and Steamin’. The 1974 remastering here by Brian Gardner is excellent. Since RVG probably would have mastered these tapes himself for the original pressings, I’m going to guess that this album sounds better than any original, for two reasons.

One, modern cutting equipment did not exist in 1956. As good as the best tube cutting equipment may have been, not many records from the era do not suffer from bloated bass and a lack of extension on the top end. Starting in the ’70s record mastering equipment got a whole lot better. Most of the best sounding pressings in our Top 100 for example were cut on these modern cutters. The sound is dynamic with very low distortion, with higher highs and lower lows, as well as transparency and openness far beyond anything that had come before.

Don’t get us wrong, we love that classic tube-mastered sound — warmer, smoother, and sweeter than the pressings that would come later, with wonderful breath of life. But, like all colorations, it comes at a price. That’s not what’s on the tape. What’s on the tape is what you hear on this amazing reissue, on the best of the four sides anyway.

Two, the vinyl used to press the original records was not as good back in 1956. Bad vinyl is not only noisier, it often imparts a gritty quality to the sound. Sometimes it’s just dull. On an issue that’s no doubt closer to home, could it be that the reason almost all the heavy vinyl pressings coming out of RTI are so veiled and lifeless is that their vinyl formulation is not up to the job? It would certainly be interesting to test the hypothesis. But how to explain the bad sound of Sundazed and other labels that are not pressed at RTI?

Two Super Hot or Better sides for two and four, which is very unusual, and two other good sides for one and three, making this a very special copy indeed. Let’s break it down.

A+, the weakest side here. A nice sounding jazz record from the ’50s. Who would know to expect more?

A++ to A+++, just short of White Hot Stamper status. Big and Rich sounding, with lots of tubey magic, but still transparent and clean! The best of both worlds.

Red Garland’s playing is amazing on this side. The guy was a genius!

A+ to A++. Spacious and clear but not all the top end it needs. (Side four has top end you will not believe.) The trumpet is lovely sounding, very natural.

A+++ and WAY off the charts. Demo Disc Quality Sound of the Highest Order. Without a doubt the best sound on the entire album. No copy sounded better. It’s White Hot.

The extension high and low sets this one apart. The presence of the instruments and the space around them just cannot be beaten!

Man, when you play a Hot Stamper copy of an amazing recording such as this, the timbre of the instruments is so spot-on it makes all the hard work and money you’ve put into your stereo more than pay off. To paraphrase The Hollies, you get paid back with interest. If you hear anything funny in the mids and highs of this record, don’t blame the record. (This is the kind of record that shows up audiophile BS equipment for what it is: Audiophile BS. If you are checking for richness, tubey-magic and freedom from artificiality, I can’t think of a better test disc. It has loads of the first two and none of the last.)

The same is true for audio equipment as I’m sure you’ve experienced first-hand. Some stereos can bore you to tears with their dead-as-a-doornail sound and freedom from dynamic contrasts. Other stereos are overly-detailed and fatiguing; they wear out their welcome pretty quickly with their hyped-up extremes. As Goldilocks will gladly tell you, some stereos are just right; they have the uncanny ability to get out of the way of the music. Some equipment doesn’t call attention to itself, and that tends to be the kind of equipment we prefer around here at Better Records. After thirty five years in this hobby I’ve had my share of both. 90% or more of the stuff I hear around town makes me appreciate what I have at home. I’m sure you feel the same way.