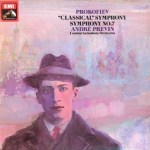 This EMI contains one of my favorite performances of the Classical Symphony, and it also carries the distinction of having the best combination of sonics and performance that we have ever heard on vinyl.

There is a recording by Previn and the LA Phil from 1986 with a performance To Die For; unfortunately it comes with the kind of mid-’80s tear-your-head-off-digital shrillness that makes the CD medium the worn out joke we analog lovers know it to be.

The First Symphony happens to be one of my favorite classical works of all time, right up there with The Planets and Pictures at an Exhibition. I wouldn’t want to go to a desert island without all three.

This pressing has exceptional transparency and dynamics, allowing the energy and precision of the performance to shine through. This is truly a sublime recording that belongs in any music collection, whether you’re a fan of classical music or not. It’s a work of such joy that I’ve never failed to be uplifted by it — except when the performance is too slow, which it too often is.

This is a difficult piece to pull off. Most of the time either the orchestra is not up to the task or the conductor misunderstands the work. Previn has a spritely take on the piece, which is precisely what it needs and, every bit as important, the London Symphony has the chops to bring his vision to life.

FROM AN OLDER HOT STAMPER LISTING

Transparent mids (just listen to the tympani at the back of the stage), It’s dynamic and has a lovely 3-D soundstage (a strength of EMI to be sure).

Even better. Big, clear, rich, transparent, with more RCA-like Tubey Magical sound than we would ever have expected to hear from an EMI, as well as the kind of orchestral power that made the music come alive — this side two was doing it all!

This side had the sweetest top of them all. Sweet sound on an EMI? Yes, it is possible (though not very likely).