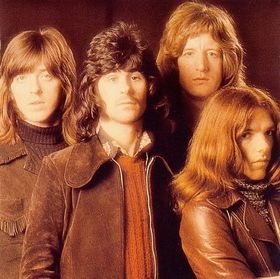 We had an original British pressing in our shootout, unbeknownst to me as it was playing of course. And guess where it finished: dead last. The most thick, congested, crude, distorted, compressed sound of ALL the copies we played. We love the work of Porky, Pecko, et al. in general, but once again this is a case where a British Band recorded in England sounds best on domestic vinyl. (McCartney on Apple is the same way.)

See all of our Badfinger albums in stock

For this music to work all the elements need to be in balance, with correct timbre for the relatively few instruments that make up the arrangements. Opacity, smear or grit instantly destroy the whole point of having a straightforward production, which is to be able to have all the parts laid out cleanly and clearly. Get the production out of the way and just let the music speak for itself.

The truly Hot Stampers remind you of the kind of basic rock and roll record that really knows how to rock. Back in Black comes instantly to mind. Black Dog off Zep IV. This is the sound you want your Straight Up to have. The title of the album is the key to the sound. No fancy packaging, just the band, Straight Up.

By the way, Geoff Emerick’s book detailing his days as the Beatles’ engineer is a must read for anybody who cares about their music. For audiophiles who want to learn more about how their recordings evolved it’s invaluable. Go up to Amazon and get yourself one if you love this music.

We have a number of entries in our new Import Versus Domestic series, in which we debunk the conventional wisdom concerning which country’s records are the best sounding for specific artists and titles.

Here are some commentaries on a subject near and dear to all of us, namely Record Collecting.

The entries linked here may help you gain a better understanding of the issues surrounding Hot Stampers.