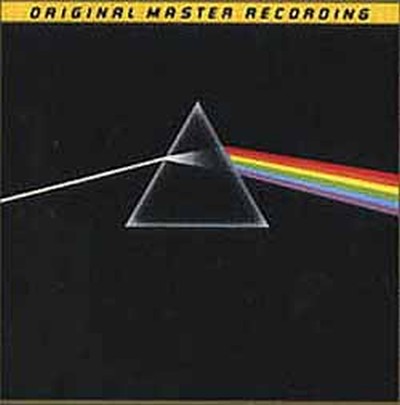 Many if not most audiophiles are still under the misapprehension that Mobile Fidelity, with their strict ’quality control’, managed to eliminate pressing variations of the kind we discuss endlessly on the site.

Such is simply not the case, and it’s child’s play to demonstrate how false this way of thinking is, assuming you have these four things: good cleaning fluids and a machine, multiple copies of the same record, a reasonably revealing stereo, and two working ears. With all four the reality of pressing variations for ALL pressings is both obvious and incontrovertible.

The discussion below of a Hot Stamper Pair of Dark Sides may shed light on some of the issues involved.

This is our first Hot Stamper Comparison Package. (For those who remember the 45 RPM/ 33 RPM Classic Records comparison packages, this is somewhat in the same vein. Of course, we don’t know that they kept the EQ the same for the 45 versions compared to the 33s of the albums included in the package, so the comparison is suspect at best. You’re not really comparing apples to apples unless you keep the EQ exactly the same. I rather doubt they did, because on Simon and Garfunkel the sound was noticeably worse at 45 than it was at 33. This is the main reason we don’t carry the 45 versions of Classic’s records: they are a lot more money, and who knows if they’re even any better?)

How did this come about, you ask? Well, it’s kind of an interesting story. My record grading associate, Robert Pincus, handed back to me a MOFI Dark Side Of The Moon that he said had an amazing version of the song Money on side two. Since we both don’t like MOFI, his comment was, “they sure got that song right, even if they can’t figure out how to do the rest of the album”.

A couple of weeks later I got in another Dark Side Of The Moon on MOFI, and I needed to know what the playing condition was because it had a few light marks, so I dropped the needle on the first track on side one: Breathe. Now Breathe is my favorite test track for side one for any version of Dark Side Of The Moon, Half-Speed or otherwise. When the voices come in about halfway through the song, you can tell that most copies are too bright simply by listening to the vocals on this track. The cymbals might sound wonderful; lots of other instruments might sound wonderful; and there might be plenty of ambience, detail and transparency. But all of that counts for nothing if the voices don’t sound right. And on most copies the voices sound bright, aggressive, grainy and transitory. (This is the case with the new 180 gram 30th Anniversary copy, I’m sorry to say.)

I flipped the record over, and started up side two. The sound was DREADFUL. As I was listening to Money, the thought kept going through my head, “This is the track that MOFI was supposed to have gotten right on side two?” It sucks! It’s hard; there’s no real transparency; the bass is all flabby and wrong. The whole affair is sour and off-putting.

Then I realized: this must be a bad stamper for side two. I pulled out the copy that Robert had raved about, and sure enough, side two was MAGICAL. ROTM — Right On The Money as we like to say around here at Better Records. There was simply no comparison between the two. They were night and day different. One was completely involving and one made me question whether my stereo was working right.

Isn’t that the reason for Limited Edition Audiophile Records in the first place? The whole idea is to take the guesswork out of buying the Best Sounding Copy money can buy.

But it just doesn’t work that way. I hate to be the bearer of bad news, but my entire website is based on the proposition that nothing of the sort is true. If paying more money for an audiophile pressing guaranteed the buyer better sound, 80% of what we do around here would be a waste of time. Everybody knows what the audiophile pressings are, and there would be nothing for me to do but find them and throw them up on the website for you to buy. Why even bother to play them if they all sound so good?

Obviously this is not the case. Most of them suck. You’ll notice that we carry virtually no new releases from Speakers Corner anymore, when we used to bring in the new titles on a regular basis. The current quality of their mastering (Elvis, the new Mercury’s, etc) is so abysmal that it would take much too long and cost much too much money to unearth the few gems they got right from the huge pile of crappy new records they released.

If you’ve spent any time on the site at all you know I am not a fan of Mobile Fidelity’s mastering. There are a dozen or so really great MOFIs, which can be seen on the listing to the left entitled Mobile Fidelity Albums Of Special Interest. Dark Side Of The Moon has never made it to the list, and for good reason. The average copy of DSOTM on MOFI is Not Good.

The person who buys this two LP Package will have the opportunity to hear for himself just how bad most MOFI pressings of Dark Side are. With these two LPs, you are getting an Amazing Side One and an Amazing Side Two – just not on the same piece of vinyl. (The joke here at Better Records is that I should label which side sounds good and which side doesn’t in case the buyer has trouble telling them apart. Since so many audiophiles like so many bad sounding records – don’t get me started – this is not as ridiculous as it sounds. But the difference between the two sides is so OBVIOUS that virtually anyone will hear it. (Even those people who still think that MOFI was a great label.)

$250 is a lot to pay for the MOFI of Dark Side Of The Moon. But consider this: the UHQR sells for two to four times that amount, and doesn’t sound as good as the Hot Stampers found here. Of course, the people that buy UHQRs would never notice that, because they would have assumed that they had purchased the Ultimate Pressing and wouldn’t see the need to try another.

I was guilty of the same Bad Audiophile Thinking myself 15 years ago. I remember buying the UHQR of Sgt. Pepper and thinking how amazing it sounded and that I was so lucky to have the world’s best version of Sgt. Pepper. Now if I were to play that record it would be positively painful. All I would hear would be the famous MOFI 10K Boost on the top end, (that MOFI lovers never seem to notice), and the flabby Half-Speed mastered bass (ditto). Having heard a good Sgt. Pepper, like the wonderful import Hot Stamper copy we put on the site awhile back, now the MOFI UHQR sounds so phony to me I wouldn’t be able to sit through it with a gun to my head.