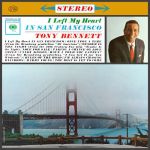 Albums such as this live and die by the quality of their vocal reproduction. On this record Mr. Tony Bennett himself will appear to be standing right in your listening room, along with the 38 other musicians from the session (actually they’re probably sitting).

The space of your stereo room will seem to expand in all directions in order to accommodate them, an illusion of course, but nevertheless a remarkably convincing one.

Some quick notes: Highly resolving; tonally balanced; rich bottom end; breathy vocals; instruments are jumping out of the speakers; dynamic; with a touch of grain and spit on even the best copies. Killer. Can’t be beat.

Might be slightly better, but let’s just leave the grade at Triple Plus.

The first track is not as well recorded as those that follow. The violin is sweeter on the second track here than on any other side we played. The whole production is so immediate, so right, and so real it may just take your breath away.

The third track is rich, solid and tonally correct, which pretty much sums up the sound we heard on the best copies of the album.

We played a few decent sounding reissues from the ’70s that may eventually make it to the site. Again and again my notes made it clear that those pressings could have used more tubes in the chain.

Now keep in mind that we are talking about 1962 tubes, not the stuff that engineers are using today to make “tube-mastered” records. Modern pressings barely hint at the Tubey Magical sound of a record like this, if our experience with hundreds of them is any guide.

We, unlike far too many of today’s misguided audiophile reviewers, have a very hard time taking any of the new reissues seriously. We think the data — the unrelenting mediocrity to be heard on these modern pressings — are pretty clear in that regard.

If you’ve ever heard a pressing that sounds like this one you know from experience there hasn’t been a record manufactured in the last forty years that has its sound. Right, wrong or otherwise, this kind of sound is simply not part of the 21st century world we live in.

If you want to be transported back to San Francisco, or in this case New York’s famed Columbia Studios, circa 1962, you will need a vintage record like this to do it right.

Behind the Scenes Recording I Left My Heart In San Francisco

The building on 30th Street was square and contained a square studio, which Columbia brought online in 1949. The former Armenian church offered a 100-foot-square recording room, with space enough for an elevated 8×14-foot control room, with the custom console made by Columbia’s technical maintenance team; it was an 8-channel affair that had been expanded to 12 by 1962, to accommodate the Scully 8-track recorder Laico was working on.

The room’s natural resonance was moderated by drapes on the walls that reached toward the soaring ceiling. It was certainly big enough for the 38-piece orchestra that was tuning up at 10 p.m. that night when Bennett’s session was scheduled to start, with Laico engineering and Miller producing. “That’s when the musicians were available,” says Laico. “You wanted them late at night, when they were at their best. We usually got four tunes out of every session, they were so good.”

In 1962, Frank Laico was already 44, a veteran of the old regime at Columbia Records, an engineer at the label’s studios at 799 Seventh Ave. since July, 1946; he later moved to the new studios at 49 East 52nd St., originally the CBS radio network building. But Laico preferred working at Columbia’s studios on East 30th Street, just off Third Avenue. Away from the centralized office and studio combination that Columbia’s “Black Rock” building was intended to be, it was such a magical room that Laico basically left his heart there, too. “The day they knocked that studio down, in 1982, was the saddest day of my life,” the 82-year-old Laico recalls somberly. “That was the day I decided to get out of Columbia.”

Mitch Miller liked 30th Street, too; Laico remembers that Miller issued a fiat that nothing about the building was to be changed — that included not scraping the grimy hardwood floors, lest it scrape away the aural magic, as well. “Don’t even paint it, he told them.” Laico says. “But sure enough, a month after Mitch resigned years later, they were in there cleaning it up.”

The building on 30th Street was square and contained a square studio, which Columbia brought online in 1949. The former Armenian church offered a 100-foot-square recording room, with space enough for an elevated 8×14-foot control room, with the custom console made by Columbia’s technical maintenance team; it was an 8-channel affair that had been expanded to 12 by 1962, to accommodate the Scully 8-track recorder Laico was working on. The room’s natural resonance was moderated by drapes on the walls that reached toward the soaring ceiling. It was certainly big enough for the 38-piece orchestra that was tuning up at 10 p.m. that night when Bennett’s session was scheduled to start, with Laico engineering and Miller producing. “That’s when the musicians were available,” says Laico. “You wanted them late at night, when they were at their best. We usually got four tunes out of every session, they were so good.”

“I Left My Heart in San Francisco” had excited Miller, who thought it would be a hit for Bennett. According to Laico and Mike Figlio, another Columbia engineer who mixed the track, Bennett was less than thrilled with the song, so it was left till the end of the session. Laico had set up what was a pretty standard microphone configuration for the time. He preferred to give each component of the orchestra its own microphone and track, vs. the classical approach of blending overhead mics above the entire orchestra. Thus, the strings, the horns and the woodwinds on the record each had their own track, as did the rhythm section of bass, drums and piano. “No one was worried about isolation or any of that horseshit back then,” says Laico. “The only isolation I went for was a baffle around Tony as he sang, and it was low enough that he could see the conductor.”

Laico recorded Bennett’s vocals with a Neumann U49, the result of a series of experiments over the years to find the right mic for the singer. “When Mitch and I worked on a new singer, we’d usually spend the first session just developing a sound for them, including which microphone, as well as EQ settings and echo,” he explains. “Once we got that, it went into my log book, and Mitch always said not to change anything. Same thing for Andy Williams, Johnny Mathis, Barbra Streisand, and anyone else we did.”

Laico never did learn why Bennett didn’t feel a rapport with the song, but it didn’t seem to affect his performance. In fact, says the engineer, pushing it to the end of the session probably worked in its favor, allowing Bennett’s voice to loosen up and some subtle, but powerful, late-night voodoo to infect the delivery. “The first two takes of it were for levels and for everyone to find an approach to the song, including Tony,” he recalls. “On the third take, Tony says, ‘That’s it, let’s not do any more.’ A while earlier, Mitch had left because he had an early appointment the next morning. So, I had to make a decision. So I says, ‘Tony, we’re still looking for the one we need. We’ve gone this long, let’s do one more.’ That next one was the one.”

Laico had been tapping into the 30th Street studio’s remarkable pair of live echo chambers during the session, sending signal through an aux into a speaker in the chamber and returning it via a Neumann U67. Bennett heard it in his headphones, though the track was recorded dry with only a touch of EQ and some compression from a Columbia-built compressor.

After the session folded at around 3 a.m., Laico made a rough mix for Miller to hear the next day. The multitrack master, on a reel of Ampex tape, went to the studios at 799 Seventh Avenue, where Mike Figlio would do the final mix. Figlio, who had started work at Columbia in 1959 and today runs a well-known and eponymously named restaurant at the top of Music Row in Nashville, remembers that the studio in the 799 building was on the top floor, and would, in a few years, be vacated by Columbia and become A&R Studios, owned in part by Phil Ramone.

The tracks presented to Figlio were meticulous, characteristic of Laico’s recordings, he says. “Frank had a good habit of keeping different elements on separate tracks, like strings and horns, and keeping the rhythm section grouped together,” he says.

As might have been expected, Figlio says he mixed the record with Bennett’s vocal fairly well up front. However, he also notes that mixers had certain biases that crept through and marked their mixes. “You can always tell a mixer’s background,” Figlio says. “Nine times out of 10, he’ll favor his own instrument. If he was drummer when he was younger, the drums will be louder. I was a vocalist.”

The mix was fast; Figlio estimates that he spent about an hour on the first song of the session, getting sounds and balances, with each successive mix going by more quickly, and “I Left My Heart…” was the last song on the reel. Figlio says he put virtually no EQ on the track, but did run the vocal and the strings through the 799 studio’s famous stairwell echo chamber, seven stories tall.

Like many of Tony Bennett’s hits, “I Left My Heart In San Francisco” went to the Top 10. This one stayed on the charts for three years, won the Grammy for Record of the Year in 1962 and helped Bennett win another Grammy for Best Solo Vocal Performance, Male, that same year. And not surprisingly, Bennett came to love the song, just like everyone else.