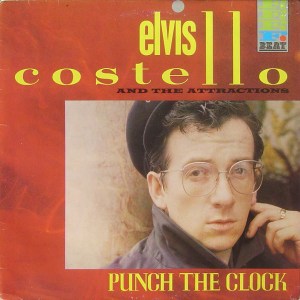 The drums have real body and resonance here, a far cry from the wimpy cardboard drums so many rock records have. Listen to the drum sound on Charm School. Man, those are some BIG FAT PUNCHY DRUMS — very reminiscent of Bowie’s Let’s Dance. The drum sound on that album is some of the best we’ve ever heard, bar none, and this copy was also OUTSTANDING in that regard.

On this copy you get the full-on bottom end WHOMP you paid for, with no loss in control. You can clearly follow Bruce Thomas’s bass lines throughout the songs, a real treat for any music lover. (He and Elvis don’t get along, hence the end of the Attractions as his backing band. I guess we should be thankful for the nine albums on which they were together; many of them are Desert Island Discs for me.)

There’s plenty of low-end on this record; regrettably most copies suffer from either a lack of bass or a lack of bass definition. I can’t tell you how much you’re missing when the bass isn’t right on this album. (Or if you have the typical bass-shy audiophile speaker, yuck.) When the bass is lacking or ill-defined, the music seems labored; the moment-to-moment rhythmic changes in the songs blur together, and the band just doesn’t swing the way it’s supposed to.

The bass, along with the horn sound, are the two key elements to getting a good copy of this record. The horns are often compressed, making them lose their bite and smearing them together. On some copies you can pick out the trombones and on some copies you can’t; you just hear Horns because the individual instruments are smashed into a congested mess. This is Elvis’ Motown Album; the horns are what bring the music to life. They’re what make this album fun.

The overall clarity and transparency here is superb, allowing you to appreciate subtleties in the top end even when the bass and drums are really POUNDING. The top end has more extension and it’s open and sweet. Right out of the gate, Let Them All Talk is lively and full of energy. Elvis’ vocals have all the presence and clarity you could hope for. Since the drums are such a driving force for the Attractions, you have to have room and spaciousness around them.

This copy showcases the percussion with weight down low and harmonics on the cymbals. The female background singers are clear, another tough test.

Our Difficulty of Reproduction (DOR) Scale

It should be noted that this is not an easy record to reproduce well. Everything needs to be working at its best to bring this recording to life, especially in the range of 200 cycles and under, an area where most audiophile systems are at their weakest. If you’ve got power to spare down there, this one will really rock.

This is one of my favorite Elvis Costello albums. I remember loving the sound of my old import copy from twenty years back. Now I know better: that most of them leave something, and sometimes a great deal, to be desired. Did I have good one? Who can say? Everything is different, and revisiting old sonic favorites can sometimes be a bit of a shock. (Of course this is especially true for all the old MoFis I used to like. Now most of them make me gag.)

By the way, we played a domestic copy of this album, just for fun you might say, and sure enough, it was a real mess. Boosted highs, poor bass definition and copious amounts of grit and grain — ’70s Columbia at their best, what else is new?

The first album and Spike are the only Elvis records I know of that sound good on domestic vinyl. [Spike no more, we like the imports better now.] Forget the rest. If you love Elvis Costello as much as we do around here, we suggest you do yourself a favor and trash your domestic LPs — you need an import to even get in the ballpark, and that’s far from a guarantee of good sound. Elvis is “Still the King,” but you would never know it without the right pressing — like this one.

This is that rare breed of music that never sounds dated, especially considering the era in which it was produced. Music with real depth such as this only gets better with the passage of time. The more you play it, the more you appreciate it, and love it. If Shipbuilding doesn’t make you feel something powerful and deep inside, you have a problem somewhere. Let’s hope it’s your stereo, because that can be fixed.