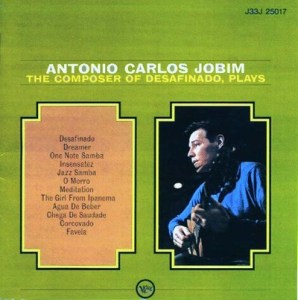 We’re big fans of Jobim here at Better Records, and this pressing was one of the best from our recent shootout. We had a wonderful time listening to a big pile of pressings — the sound (and music) were OUT OF THIS WORLD. We were shocked at just how well recorded this album is.

Credit engineer Phil Ramone for correctly capturing the sound of every instrument here: the guitars, piano, flutes, strings, drums, percussion instruments — everything has the natural timbre of the real thing. I used to think this recording erred on the bright side, but not the Hot Stamper copies. They are tonally Right On The Money. (When the balance lacks lower midrange the sound gets lean, which causes the strings to seem brighter than they really are, a not uncommon problem with some of the pressings we played.)

We’ve played a ton of different versions, including imports, originals, reissues (all stereo), and one lone mono, which was so ridiculously bad sounding we tossed it right out of the competition and into the trade pile.

For those of you playing along at home, we are not going to be much help to you here in finding your own Hot Stampers. Every version had strengths and weaknesses and all are represented in the listings we will be putting up on the site.

I’m a HUGE fan of Jobim’s music. In my opinion this is the best album he ever made. If you find yourself loving these syncopated beats, you owe it to yourself to check out Sergio Mendes’ music. He did wonderful arrangements of many of Jobim’s songs, and the sound (at least on the Hot Stamper pressings) is out of this world! Astrud Gilberto does wonderful versions too, but her records are very difficult to find in audiophile condition. Believe me, we’ve tried.

The string arrangements by the phenomenally talented producer/arranger Claus Ogerman surely contribute a great deal to the beauty of this music, and much of its “feel.”. This is the man who made Francis Albert Sinatra & Antonio Carlos Jobim such an original and powerful departure in Sinatra’s body of work. He continued to work with Jobim on a number of follow-up albums, including A Certain Mr. Jobim (1967) and Wave (1967). From 1963-67 he arranged some 60-70 albums for Creed Taylor’s Verve and then went on to work with him extensively at CTI.

And what would “Breezin'” be without Ogerman’s lush strings? Not to be too uinkind, but probably just another George Benson album.