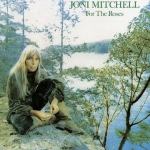 This is probably the most underrated Joni Mitchell album, both in terms of sonics and music. It seems that everyone wants a great copy of Blue or Court And Spark, but this album ranks right up there with them and does not deserve to be overlooked.

Court and Spark (1974) is up at the top up the list as well, but Roses (1972) seems to have more recording purity. Perhaps the engineers saw this as an opportunity to address the problems with Blue, the album that preceded it.

By the time Joni had fully indulged her jazzier inclinations with Court and Spark some of the recording quality had been lost in the quest for slicker production values for which that album is known. The complexity of the instrumentation required more multi-tracking and overdubbing, and as good as that record can sound on the best copies, in a head to head matchup with For the Roses the latter would probably win, and probably by no more than a nose.

Clear, present, breathy vocals, about as good as Joni can sound on vinyl, which is saying a lot.

The second track is a great test. Here the guitars are full-bodied, harmonically rich, with more reverb and space than practically any side one we have ever played. The Tubey Magical liquidity of the sound is what vintage analog is all about. No reissue and no CD will ever get that sound the way this copy does.

And you don’t need tubes in your system to hear it. The magic is on the tape and it was transferred beautifully to this piece of vinyl.

Listen to how huge the piano is — no other copy could reproduce the size, weight and clarity of that piano. No two copies will show you the same piano, which makes it a great test for sound. Put this side up against the best you’ve got, it should be no contest.

Breathy, immediate vocals are key to any Joni Mitchell record and this side gets them as well as any we heard in our shootout.