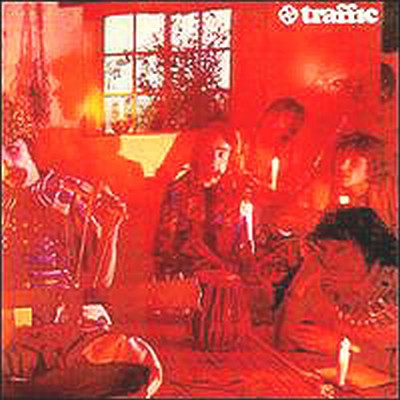 How can that be you ask, dumbfounded by the sheer ridiculousness of such a statement? Well, dear reader, I’ll tell you. It’s a dirty little secret in the record biz that sometimes the master for the presumptive Hit Single (or singles) is pulled from the album’s final two track master mix tape and used to make the 45 single, the idea being that the single is what people are going to hear on the radio and want to buy, or, having heard it sound so good on the radio, go out and buy the album. One way or another, it’s the single that will do the selling of the band’s music. This is clearly the case with the albums of Traffic.

A dub is then made of the tape that was used to cut the 45 and spliced back into the album master, so that the single (or singles) is one generation down from the master for the other songs on the side.

This explains why the hit single from so many albums is often the worst sounding song on the album — it’s the one most likely to suffer from bad radio EQ and distorted, smeary, sub-generation sound.

And it also explains another anomaly those of us who play tons of records run into from time to time: songs on greatest hits albums that sound better than their counterparts on the original albums from which those songs are taken. That’s crazy talk, but this Traffic record is all the evidence you need to demonstrate that as it crazy as it seems, every once in a while it turns out to be true. This is clearly one of those times.

Heaven Is In Your Mind

Best evidence: Heaven Is In Your Mind, the second track on side one. It is amazing sounding here and such a disappointment on every Pink Label Island original (and reissue) we’ve played. Once you know how good that song can sound — by playing a Hot Stamper copy of Best of Traffic like this one — going back to the original version of the song found on the album is not just a letdown, it’s positively painful. Where’s the analog magic? The weight to the piano? The startling clarity and super-spaciousness of the soundfield? The life and energy of the performance?

They’re gone, brother. Not entirely gone, mind you, more a shadow of what they should be, but once you’ve heard the real thing it’s not a lot of fun listening to a shadow.

Kick Them While They’re Down

Since we here at Better Records never tire of beating long-dead horses, let’s lay into a couple of our favorites: Heavy Vinyl reissues and CDs. When we play these “Shadows of the Real Thing”, so lacking in life and the analog magic of the best pressings, the one thing we can say about them consistently is that they’re just a drag. They’re no fun. They’re simply a cheap imitation, one that doesn’t give you the thrill this wonderful music is supposed to give you — can give you and will give you — if you have the right vinyl pressing.

Yes, that old aphorism is still true: you can fool some of the people all of the time and all of the people some of the time, but you can’t fool people with good turntables and records that sound like this. You can hear how much better this album sounds than any of that other stuff from another room. This is the kind of sound that puts the lie to all the remasterings and digital versions, the ones that appear to be doing a good job of fooling some of the people.

Play this album for your skeptical friends. You know you have them, we all do. They can’t not hear it. No matter how badly they may not want to admit it, this is the sound they can’t get any other way. It’s a reality that we all have to stop fighting and just learn to accept. Reality is that thing that, no matter how hard you want it to, just won’t go away.

This kind of sound is reality. You can’t get to it any other way; don’t bother to waste your time trying, ain’t gonna happen.