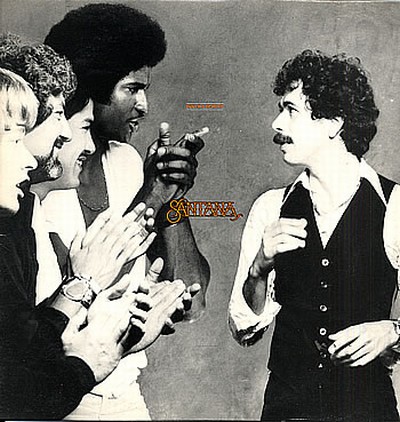 Just one of the  distinguished members of our Rock and Pop Hall of Fame that we’ve added recently (now 200+ strong!).

It’s also another in the long list of recordings that really comes alive when you Turn Up Your Volume.

It’s a true Demo Disc in the world of rock records. It’s also one of those recordings that demands to be played LOUD. If you’ve got the the big room, big speakers, and plenty of power to drive them, you can have a LIVE ROCK AND ROLL CONCERT in your very own house. When Santana lets loose with some of those legendary monster power chords — which incidentally do get good and loud in the mix, unlike most rock records which suffer from compression and “safe” mixes — I like to say that there is no stereo system on the planet that can play loud enough for me. (Horns maybe, but I don’t like the sound of horns, so there you go.)

On side two the final guitar solo Santana takes on Well All Right gets LOUDER in the mix than any guitar solo on any rock record with which I am familiar. The sound gets louder after the first chorus, then louder still right before the second solo, and then the solo itself gets even louder until it seems to be as loud as live music. (Operative word: seems.)

Some copies get loud and some do not. Some stereos are dynamic and some are not. If you have the right stereo, set at the right volume, and THIS copy, you will hear something that not one out of one hundred audiophiles (or music lovers) have ever heard on a record — LIVE ROCK SOUND.

What makes it possible to play this record so loud and still enjoy it? Simple. Just like Nirvana, when the sound is smooth and sweet, completely free of aggressive mids and highs, records get BETTER as they get LOUDER. (This of course assumes low distortion and all the rest, but the main factor is correct tonality from top to bottom, and this record has it.)

There were about a half dozen different stampers for each side that we did the shootout with. Like other Hot Stampers you may have read about, sometimes the instruments and voices just JUMP out of the speakers. When that happens I usually write “It’s Alive!” on the post-it, and I know exactly what to do with it — it goes right in the Contender pile, to be compared with the other top contender copies. It’s definitely a crazy Hot Stamper; just how hot we still need to find out.

Which is what happens in Phase Two of these affairs. We go back through all the best copies to see in what areas they really shine and in what areas they may fall a bit short of the best. Occasionally a record will come along that just murders what I thought was the best.

But back to Inner Secrets. I know EXACTLY the kind of sound I like on this album. When the background vocals come in, on the tubey magical copies they are wall to wall and sweet as honey, with no trace of grain or edge. Big as life too. The guitars have plenty of bite, but no matter how loud they get, they never seem to strain. The louder they get the more I like it. That’s the ticket as far as I’m concerned.

This is, IMHO, their best later album, and much better than the ones Carlos has been doing lately, which frankly suck in my opinion. Well All Right and Dealer are the two monster tracks on this one — both have some of the best rock sound I have ever heard.

Like Abraxas, when you play a Hot Stamper copy good and loud, you find yourself marveling at the musicianship of the group — because the Hot Stamper pressings, communicating all the energy and clarity the recording has to offer, let you hear what a great band they were.

On badly mastered records, such as the MoFi or CBS Half-Speed of Abraxas, the music lacks the power of the real thing. I want to hear Santana ROCK. Only the best early Columbia pressings let me do that.

See all of our Santana albums in stock