More about The Last Record Album. 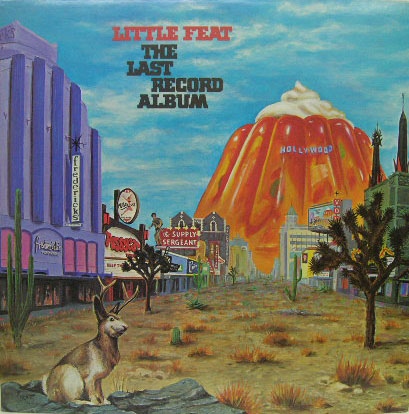 Musically The Last Record Album is one of our favorite Little Feat releases, and the recording has many excellent qualities. Prime among them is amazing bass; the bass goes REALLY deep in places (Long Distance Love) and it’s punchy and rich throughout the albumThe problem has always been an overly smooth top end, combined with congestion, smear, and a serious lack of presence. The good news is that if you clean enough copies with the advanced cleaning techniques we’ve developed, and you make enough improvements to your stereo, room, etc., with the right copy you can actually get this album to sound clear AND rich.

This is one of those copies, both clear and rich. It’s one of the best we have ever heard.

Most copies of this album are shockingly dull and compressed. On such copies the band itself sounds bored, as if they lack conviction in their own songs.

But it’s not their fault. Whose fault it is is never easy to fathom; bad mastering, bad tapes, bad vinyl, bad something else — whatever it is, that thick, lifeless sound turns this powerfully emotional music into a major snooze-fest. It’s positively criminal but it happens all the time. It’s the reason we have to go through a pile of copies to find one that sounds like this.

Here you can find the kind of transparency that lets you hear the studio space around all the instruments. Many copies have a bad case of ‘cardboard drums.” However, when you are lucky enough to have one of our high-rez copies spinning on your table you will see immediately that the drum sound is right. The drums are rich and fat, a perfect match for the sound of the album as a whole.

Now if you have mini-monitors or screens, some of that fat drum sound won’t come through nearly as well as it might with other speakers: for example, big dynamic ones like the Legacy Focuses we use. To our way of thinking that makes The Last Record Album precisely the kind of record that one should bring to one’s favorite stereo store to judge their equipment.

They can play Famous Blue Raincoat; they do it all day long. But can they play The Last Record Album and have it sound musical and involving? Can they get it to rock? Will they even turn it up loud enough to know? My jaded money’s on a big fat no for all three.

Rockin’ The Last Record Album is a much, much tougher test than what they are used to, one that their systems will struggle to pass. That’s what makes it a good test.

Leaner and cleaner — the kind of audiophile sound I hear everywhere I go — is simply not going to work on this album, or Zuma, or Houses of the Holy, or the hundreds of other classic rock Hot Stampers we put up on the site every year. There has to be meat on those bones. To switch metaphors in the middle of a stream, this album is all about the cake, not the frosting.

Keep that in mind when they tell you at your local salon that the record you brought in is at fault, not their expensive and supposedly “correct” equipment. I’ve been in enough of these places to know better. If you’ve put your audio time in, their excuses should fall on deaf ears.