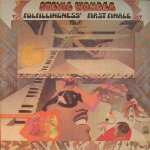 More of the Music of Stevie Wonder

Over the course of the last year or two, for the first time in my life I’ve really gotten to know the album well, having found a CD at a local store to play in the car. I’ve listened to Fulfillingness’ First Finale scores of times and now see that is some of the best work Stevie Wonder ever did, right up there with Innervisions and miles ahead of any other Stevie Wonder album.

To my mind the best songs on the album are the quieter, more heartfelt and emotional ones, not the rockers or funky workouts. My personal favorites on side one are: Smile Please. Heaven Is 10 Zillion Light Years Away, Too Shy to Say and Creepin’, which, as I’m sure you’ve noticed, are all the songs that weren’t hits.

On side two the two slowest songs are the ones I now like best: It Ain’t No Use & They Won’t Go When I Go (famously and brilliantly covered by George Michael on Listen Without Prejudice Vol. 1 in 1990).

If you take one of our Hot Stampers home see if you don’t find something very special about the tracks I have noted above.

Our original pressings have the kind of Tubey Magical Midrange that modern records cannot even BEGIN to reproduce. Folks, that sound is gone and it sure isn’t showing signs of coming back.

If you exclusively play modern repressings of vintage recordings, I can say without fear of contradiction that you have never heard this kind of sound on vinyl.

Old records have it — not often, and certainly not always — but new records do not, ever.

What is lost in these newly remastered recordings?

Lots of things, but the most obvious and bothersome is transparency.

And that also turns out to be the main issue with Fulfillingness. Many copies are thick and opaque.

Finding the right balance between Tubey Magical Richness and Transparency is the trick, and we think our best copies strike that balance as well as it can be struck. 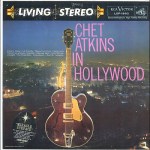 More of the Music of Chet Atkins

It’s been quite a while since I played the Classic pressing, but I remember it as nothing special, tonally fine but low-rez and lacking space, warmth and above all Tubey Magic.

I don’t think I’ve ever played an original that didn’t sound better, and that means that the best grade to give Classic’s pressing is probably a D for below average.

You may enjoy this recent commentary in which we went into some detail about Bernie Grundman’s shortcomings as a mastering engineer.