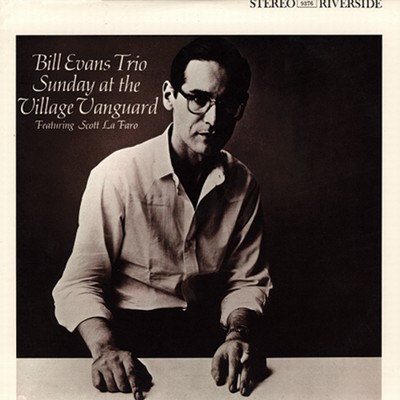 See all of our Bill Evans albums in stock

The best sounding Bill Evans record we have ever played? Probably. it’s safe to say that at the very least it’s as good as any we’ve critically evaluated on our current system.

Waltz for Debby Vs. Sunday at the Village Vanguard

I was never all that impressed with the OJC of this album back in the ’90s when I used to sell it as an in-print record. I loved the OJC of Waltz for Debby, an album that completely smoked the awful Analogue Productions pressing mastered by Doug Sax from 1992. But Sunday? Good, not great.

Of course now my first thought is that I probably had a top quality “stamping” of Waltz for Debby and a somewhat lesser copy of Sunday, but I didn’t know much about stamper variations back then and it would not have occurred to me to buy five or ten copies of both albums and compare them.

In the ensuing years I lost track of the OJC pressing of Sunday at the Village Vanguard — hadn’t played it in more than a decade as a matter of fact, so when one came my way I was shocked to hear how good it sounded. Records sound a lot better than they used to I guess, and that’s the way it should be, Revolutions in Audio and all that.

Of course it quickly turned out that not every copy sounded like the hot one I had played, and bad stampers and bad record stamping ended up being the norm and not the exception.

That was the ’80s. In the ’90s a fellow from Kansas hired a mastering engineer of great renown from the Los Angeles area to improve upon the work that George Horn had done. To my never-ending consternation, most audiophile reviewers, including a rather famous one we’ve mentioned on this site a time or two, thought Sax and the Kansan had succeeded in doing just that. I held at the time and still hold to this day quite the opposite opinion — those remastered records are not only awful sounding, but fundamentally wrong sounding.

The original Riverside pressings are the best, right?

Not in our experience. We think that’s just another Record Myth.

Some of you may have discovered that the original Bill Evans records on Riverside are mostly awful sounding — I can’t recall ever hearing one sound better than mediocre — so we are not the least bit worried that this OJC won’t beat the pants off of the original, any reissue you may have, and of course any Heavy Vinyl pressing that has ever been, or ever will be, mastered.