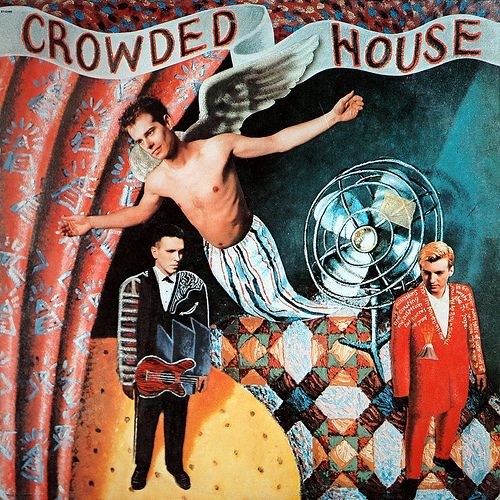 Note that this copy won our shootout on side one, and since side one has the best batch of songs here, that works out well for everyone who loves great sounding sophisticated pop music, a group that includes us to be sure.

Exhibit A: Paul Simon’s Graceland. Exhibit B: Peter Gabriel’s So.

I rest my case. Fortunately for us audiophiles, Crowded House’s debut here is big, rich, smooth, natural and, above all, ANALOG. (I really don’t know if it is actually is analog or not, but it sounds like analog, and that’s really all that matters.)

Musically side one is absolutely brilliant from first note to last. Crowded House may have wanted to be the New Beatles, but those are some pretty big shoes to fill. They fell a bit short — who can compete with The Beatles? — but in their heyday, 1985-1993, they were better at making intelligent, original, melody-driven pop than practically any other group I was listening to at the time.

(We love Squeeze’s albums from this period as well but the ’80s sound is just too processed and artificial on even the best pressings to be enjoyed on modern high-resolution audiophile equipment.)

When people ask me what kind of music I like, a common question from non-audiophiles seeing a house full of records and a custom sound room stuffed with equipment and room treatments, Crowded House is one band I’m happy to namecheck (10cc and Roxy Music and Little Feat being a bit too obscure for most people by now).

Sophisticated Pop Albums with Audiophile Quality Sound make up a large part of my record collection, with Crowded House taking its place up near the top, not on the same plane as The Beatles, say, but not that far below either. (Woodface is an album that I have played many hundreds of times over the course of the last twenty years and have yet to tire of.)

The first Crowded House album is a record that belongs no less in your collection than it does in mine. Their songs still get played on the radio and to these ears they’re holding up just fine.

What to Listen for (WTLF)

Number one: Too many instruments jammed into too little space in the upper midrange. When the tonality is shifted-up, even slightly, or there is too much compression, there will be too many elements — voices, guitars, drums — vying for space in the upper area of the midrange, causing congestion and a loss of clarity. This is especially noticeable on the second track of side one, Now We’re Getting Somewhere.

With the more solid sounding copies, the lower mids are full and rich; above them, the next “level up” so to speak, there’s plenty of space to fit all the instruments in comfortably, not piled one on top of another as is so often the case; consequently, the upper midrange area does not get stuffed and overwhelmed with musical information.

Number Two: edgy vocals, which relates to Number One above. Almost all copies have some edge to the vocals — the band seems to want to really belt it out in the choruses — but the best copies keep the edge under control, without sounding compressed, dark, dull or smeary.

We had good and bad copies of both. Interestingly, although the band is from New Zealand, the album was recorded right here in Los Angeles, so there’s no reason to assume that the source tape used to make the domestic pressings was not the real master two-track. The British copies tended to be a bit smoother, the domestic pressings somewhat livelier. As a rule we tend to like livelier.