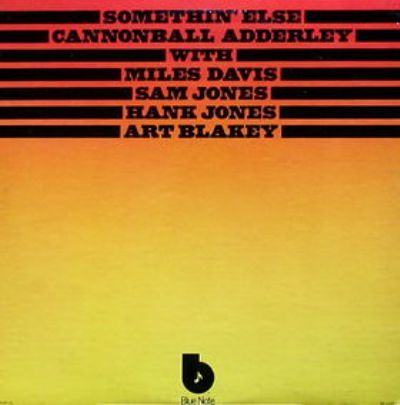 The music here is amazing — as I’m sure most of you know, this is as much a showcase for Miles Davis as it is for Cannonball himself — but the good news for audiophiles is that it’s also one of the BEST SOUNDING BLUE NOTE ALBUMS we know of! When you hear it on a copy like this, it’s just about As Good As It Gets.

Setting the Record for Straight Ahead Jazz

After doing this shootout in 2015 I would like to amend the above remarks for being much too conservative. The current consensus here at Better Records is that this album deserves to hold three — count ’em, three — somewhat related titles:

One, The Best Sounding Blue Note record we have ever played.

Two, The Best Sounding Jazz Record we have ever played.

Three, Rudy Van Gelder’s Best Engineering (based on the copies we played).

Our shootout winners had more energy, presence, dynamics and three-dimensional studio space than any jazz recording we have ever heard. The sound was as BIG and BOLD as anything in our audio experience.

Add to that a perfectly balanced mix, with tonality that’s correct from top to bottom for every instrument in the soundfield and you may begin to see why we feel that the best copies of this album set a standard that no other jazz record we’re aware of can meet.

Have we played every Blue Note, every RVG recording, every jazz record? We would never say such a thing (nor should anyone else).

However, in our defense, who could possibly claim to have critically evaluated the sound of more jazz records than we have?

There are multitudes of music experts in the world of jazz. For jazz sound quality the numbers must surely be orders of magnitude smaller, and here is where we’re sure we have more than a few critically valuable advantages: better playback equipment, better record cleaning, stacks of copies of the same title, a scientifically blinded approach and, most importantly of all, a single minded purpose. All our efforts are in service to only one end, to find the ultimate in analog sound. (Naturally we leave the sound of CDs and other digital formats to others.)

There’s not much we can say about this music that hasn’t been said (please check out the reviews and liner notes in this very listing). It’s obviously one of the most beloved Blue Notes of all time, and with good reason. The wonderful reading of Autumn Leaves is a major highlight for us, but you could really pick any track here and make a case for it.

We consider this a Miles Davis album as much as a Cannonball Adderley album; Miles picked out most of the material and is a featured soloist throughout. The next album Miles recorded was a little number called Kind Of Blue that I imagine some of you might be familiar with…

We had a grand ol’ time shooting out various pressings of this top Blue Note title and are pleased to report amazing sound for this album is not out of reach. We’ve heard more than our fair share of tubby, groove-damaged originals and smeary, lifeless reissues over the years, but this White Hot Stamper blew them all away!

This is a record we could play every week and never tire of. I just don’t think jazz music gets much better than this.