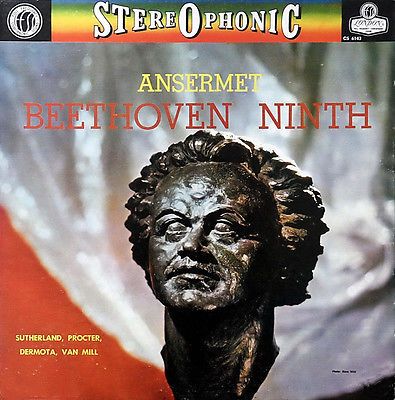 To get the chorus to play cleanly right to the very end is difficult for any vinyl pressing and this one is no exception. The chorus should play mostly without distortion or congestion even in the loudest parts, but we can’t say there won’t be a trace of one or both.

JAMES WALKER was the producer, ROY WALLACE the engineer for these sessions from April of 1959 in Geneva’s glorious sounding VICTORIA HALL. It’s yet another remarkable disc from the Golden Age of Vacuum Tube Recording.

The best pressings from the Readers Digest set with Leibowitz conducting were passable but no match for Ansermet and the wonderful hall the legendary Orchestre De La Suisse Romande recorded in, with Kenneth Wilkinson running the show no less.

In 1972 the engineering team of Gordon Parry and Kenneth Wilkinson recorded a Ninth with Solti and the CSO for Decca. We have a number of copies and hope to do a shootout with them soon. My initial impression is that they are potentially very good sounding pressings but not quite in the top tier for sound compared to this Ansermet from 1960.

The ’60 Decca/London cycle with Schmidt-Isserstedt and the Vienna Phil has sounded flat and modern to us on every pressing we have played. We no longer bother with them.

Raves for Ansermet and the Suisse Romande

With the boon of an orchestra of his own creation, Ernest Ansermet enriched DECCA’s legacy not only with groundbreaking recordings of ‘new’ repertory but also with a series of Beethoven’s Symphonies that remains competitive because of the conductor’s uncomplicated but poetic manner. This performance of the Ninth Symphony crowned the superb achievement of that series, and it is impossible to believe when listening to the DECCA [pressing] that the recording is now fifty years old.Maestro Ansermet inspired his players and singers to give a performance for the studio microphones that is redolent of the concert hall, quirks marginalized by the persuasive power of the music. Heart and genuine respect for Beethoven’s coveted score prove more inspiring than oversized musical gestures and Viennese sophistication for conductor, players, and listener.